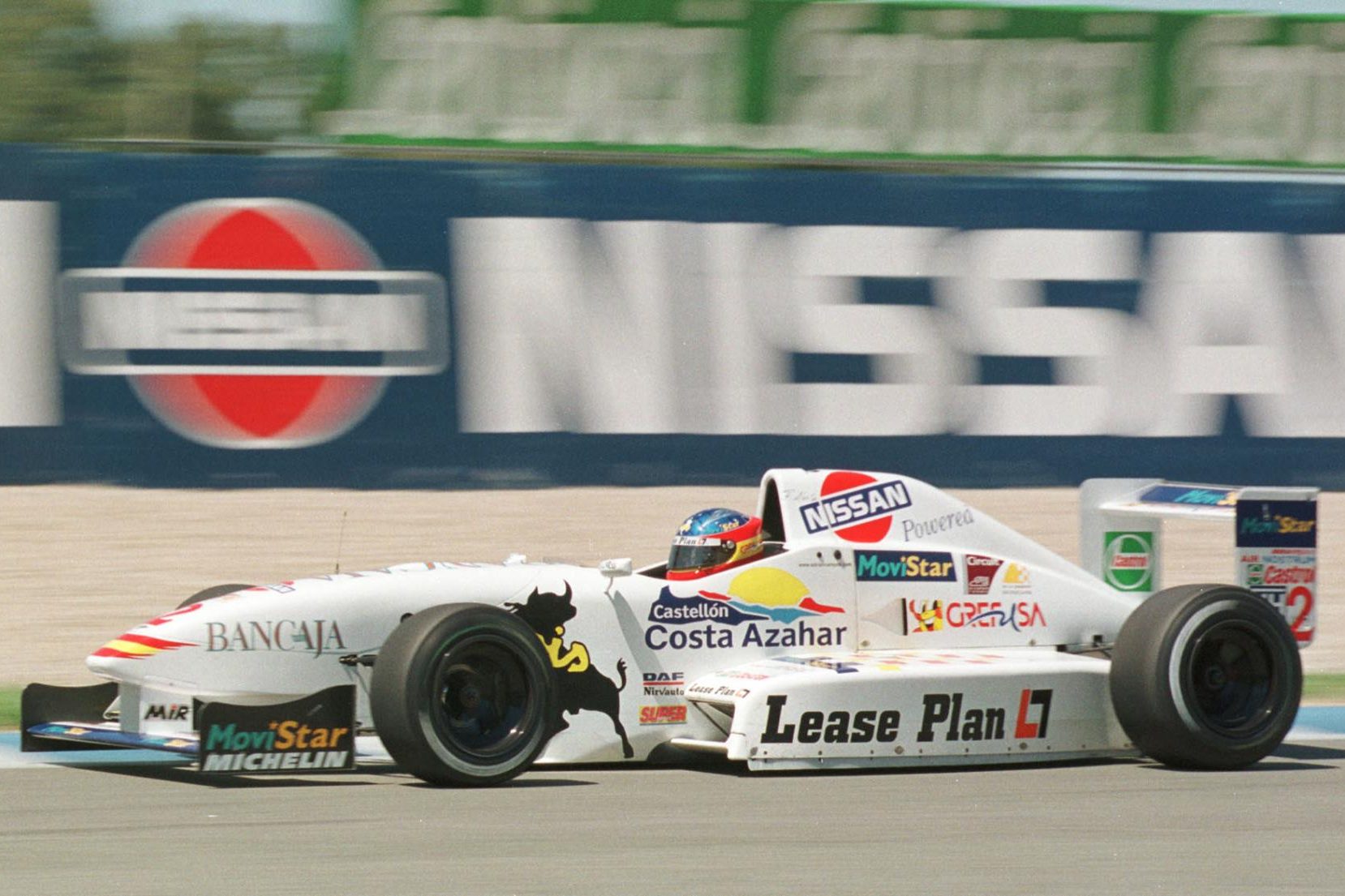 Despite Fernando Alonso’s return to Formula 1, and Carlos Sainz Jr’s move to Ferrari, the plight of Spain’s young drivers isn’t as encouraging as you would expect – even if the latest debutant is already winning

In a recent feature, Formula Scout documented the success story of Spain’s ‘Fernando Alonso generation‘. These were the young boys and girls of the 2000s that were attracted to single-seater racing by the world championship-winning success of their countryman (and probably wouldn’t have cared for F1 were it not for Alonso) and embarked on their own careers.

The most successful of those in single-seater terms is Carlos Sainz Jr, who has followed Alonso’s path through the F1 paddock and returned McLaren to the podium at last year’s Brazilian Grand Prix.

Once Alonso was a national icon, racing schools started to thrive with paying customers. The global recession took its toll, but it’s probably a fair assessment (based on the number of Spaniards that ended up racing single-seaters) that this was the best period for a young driver in Spain to set their sights on F1.

Alonso didn’t have it as easy in the 1990s, although his talent obviously shone through while in karting, and it took two attempts for him to make his own entry into car racing.

Some time before he made his debut in Formula Renault 3.5 predecessor Formula Open by Nissan, Alonso was invited to a driver shootout in Spain that was judged by some of the country’s top motorsport figures. One of those was Luis Perez-Sala, a F1 driver in the late 1980s and later a team principal in the series with Spain’s own HRT squad.

“Alonso came there and he won the selection because he was the best one,” Perez-Sala told Formula Scout. 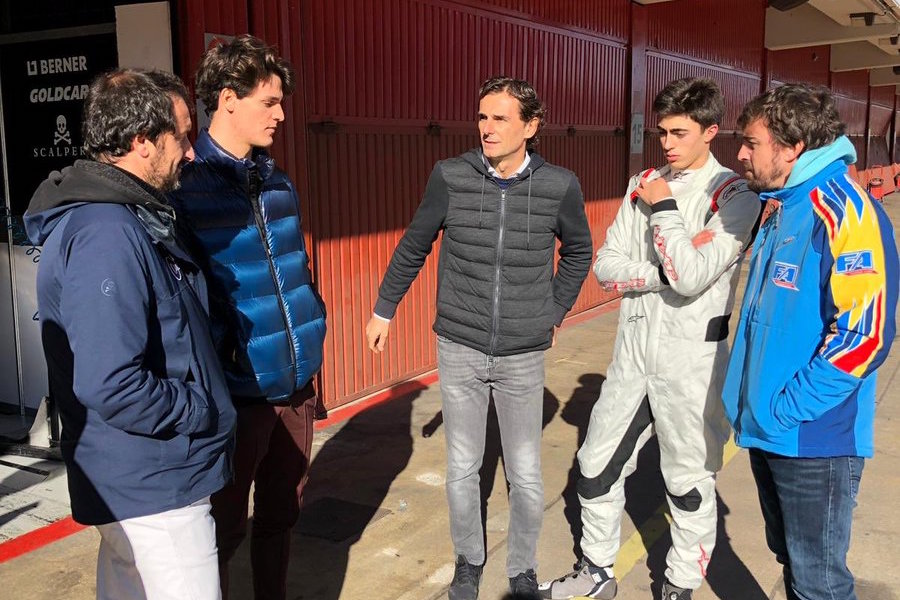 “Unfortunately he had to no money to [take it], because Elf paid the whole season, but not for the travel. And he had contract with a go-kart team, and he had to come back to go-karts, and not take the the opportunity to get the seat.

“After the one year, he had the opportunity to drive for Campos Racing, and that was fantastic for him because he had the chance to start growing and to get into Formula 1 and be world champion.”

Adrian Campos, another Spanish F1 driver-turned-team boss, had kept his eyes on Alonso while he concluded his karting career and offered him a test in the car Marc Gene had taken to the inaugural FOpen by Nissan title. Alonso turned up, impressed in the car, and was signed on a three-year deal in the series.

This wasn’t the first time such an act had given Alonso a leg-up in his career, as his time in karting was repeatedly influenced by tip-offs about his talent and opportunities not usually afforded to drivers – including racing underage in some machinery. Alonso’s Campos deal only lasted one year, as he won the title on his first attempt and moved up to International Formula 3000 while still in his teenage years. He was in F1 by his third season in cars.

Both Campos and Perez-Sala spotted a driver at the start of the 2010s who they believed had the potential to be the next Alonso, and he too was signed by Campos with the intention of carrying him from his single-seater debut to F1. 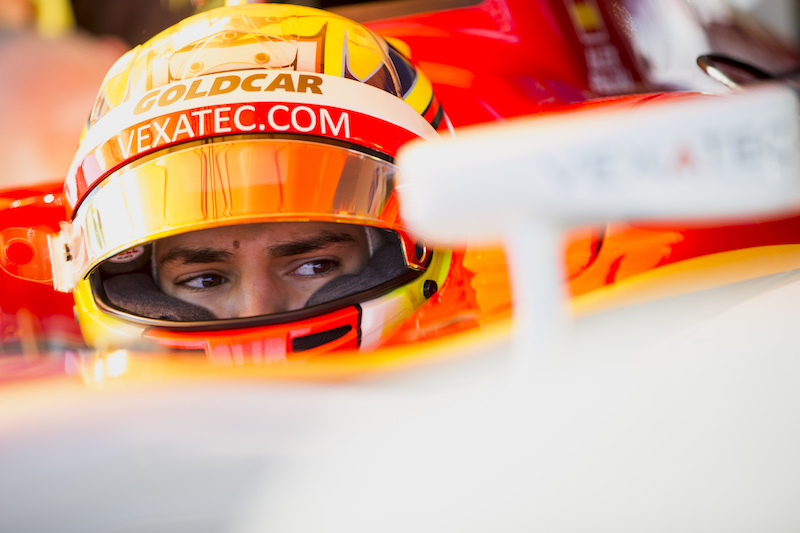 Alonso’s rapid rise came in a time when single-seaters were cheaper, and when Alex Palou made the move up to cars under Campos’s umbrella via Euroformula in 2014 he too went into a higher-level and more expensive category than his peers.

Like Alonso, Palou took little time to stand on the top step, but he then spent two years in the budget-sapping GP3 series on the F1 support bill. Campos and Perez-Sala offered career support at no cost and also helped contribute to his budget, as Campos had done over a decade prior with Alonso, but their assistance could only go so far when they needed to seek the rest of the budget in a country already waning its F1 interest and with an economy that wasn’t a rival to others in Europe.

Once Palou’s three years with Campos were up, he was in the same boat as every other Spanish youngster aiming for F1. With personal backing he was able to land a seat in Japan’s Super Formula Lights and get his career moving forward again. He was a title contender in his sole Super Formula season in 2019, and has got a podium in his first IndyCar campaign this year.

Backed by Swiss-Italian businessman Salvatore Gandolfo, the Monaco Increase Management company looks after Palou now, and named him as one of its drivers for its bid to join F1 together with Campos Racing when the next cycle of technical regulations comes in. Named alongside Palou in that bid as a prospect for the future was countryman David Vidales.

It looks like it’s the same story playing out for a third time, in a single-seater landscape that’s even unrecognisable to the one Palou arrived in six years ago and with the background scenery of a country with even less money to spend on supporting young drivers, even higher costs, and an unexpected global pandemic.

Vidales made his car racing debut at Imola last weekend in the Formula Renault Eurocup, a regional F3 series comparable to FOpen and Euroformula in their respective eras, and won both races there as well as pole in his first ever qualifying session. 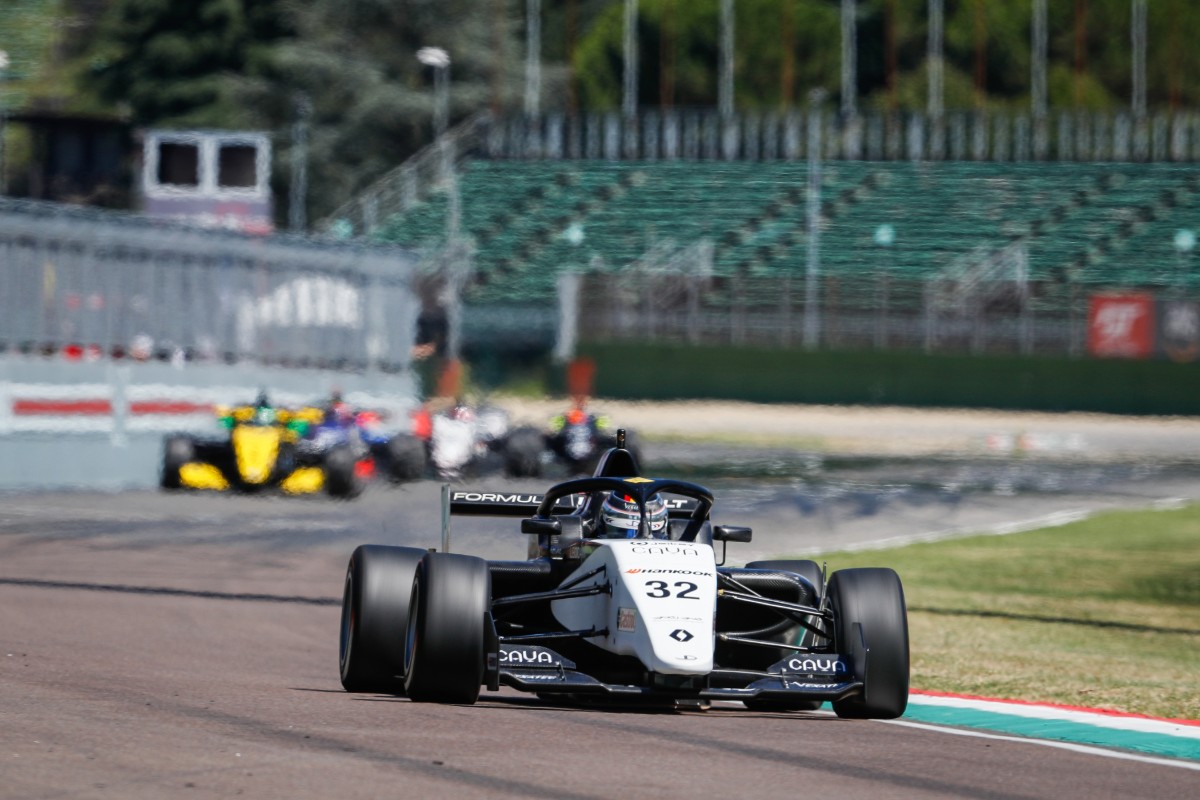 His karting career looked like it would have led to a single-seater debut several years ago – he took part in a Ferrari Driver Academy assessment in 2016 – and if he had the budget required he probably would have. Instead, he moved from OK to shifter karts and became one of the best in the world there.

In 2019 he signed a deal with Campos for a test programme in a Dallara F3 car, identical to what Palou made his debut in, and also took part in the FIA F3 Championship test at Valencia with the team. He then gathered regional F3 mileage with US Racing ahead of a planned Formula Regional European Championship season. At the last minute, he made the move over to the very similar Eurocup with JD Motorsport.

His test experience meant he actually had his mileage limited in Eurocup’s own pre-event testing at Imola, but he still made the kind of debut that makes the whole paddock (and beyond) turn their heads to take notice. Winning the Eurocup title would bring Renault backing, and there is at least one other F1 junior team with eyes on him already. If Renault wants Vidales, it would probably need to sign him before the season is done.

Campos could offer Vidales an FIA F3 Championship debut at Spa-Francorchamps later this year (when it needs a driver to fill in for Sophia Floersch) and an F1 junior team would help cover the costs for a full-time seat in the series next year if he does get signed up.

The reality is though that it’s only the F1 teams that can support the likes of Vidales all the way to the pinnacle of single-seaters, and that there isn’t enough potential sponsorship in Spain for any driver to make it independently.

One driver who almost did was Dani Clos, and Perez-Sala admits there was a “big possibility” he would have been in HRT’s 2013 F1 line-up had it remained in the world championship.

GP2 race-winner Clos’s racing career took a long time to recover once his F1 dream was over, as did Costa’s, and Perez-Sala’s emphasis now on young driver support is to look beyond F1 from the off. 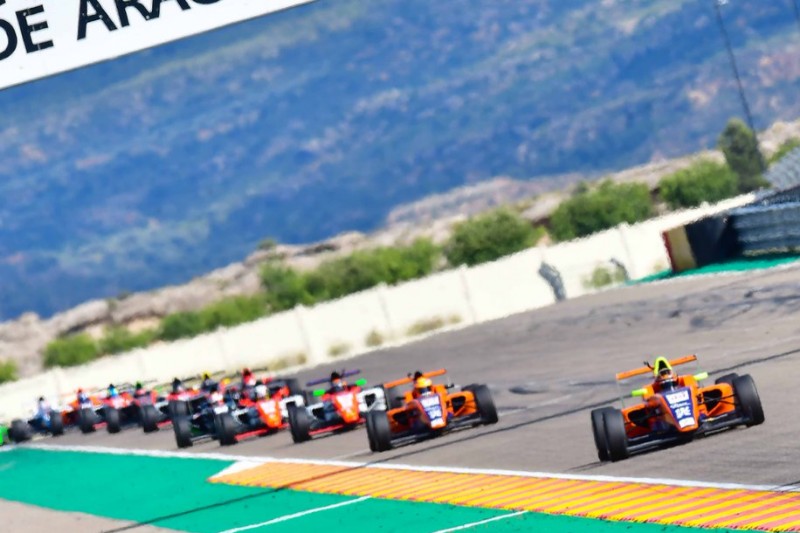 “Now, it’s not easy to support young drivers. Because the problem that we have in motorsport, even in automotive, is it’s changing a lot. Electric, combustion, it’s not something that is now [stable]. These days are not the best for us, for motorsport.

“But it’s not just for Spain. In England, it’s different, because you have Lewis Hamilton, and with Lewis a lot of talk people about F1 and many people trying to help young talents.

“In Spain, we had Alonso winning, and we were in the same scenario trying to help young drivers. But now that Alonso is gone, we are not in the best situation that I would like to be in.”

Perez-Sala made his comments prior to Alonso’s surprise decision to return to F1 next year with Renault, and when Campos’s mooted F1 return (having been the original entity behind what became HRT in 2010) was attracting a lot of speculation.

“Now, everything is open because it seems that there is going to be another door to get to F1 [with the cost cap].

“We will see. I’ve been with HRT as a team principal, in 2012, and we were there fighting to have customer cars, to try to be in the championship with lower budgets. To try to balance the budgets, because if you don’t balance the budget, you know you’re not going to be there for many years.

“Because you cannot spend each year money, money, money. You have to balance at least, you have to try to earn money. Or at least to balance. They decide to go to hybrid engines, and that’s even worse, not the solution to go down with the budget.” 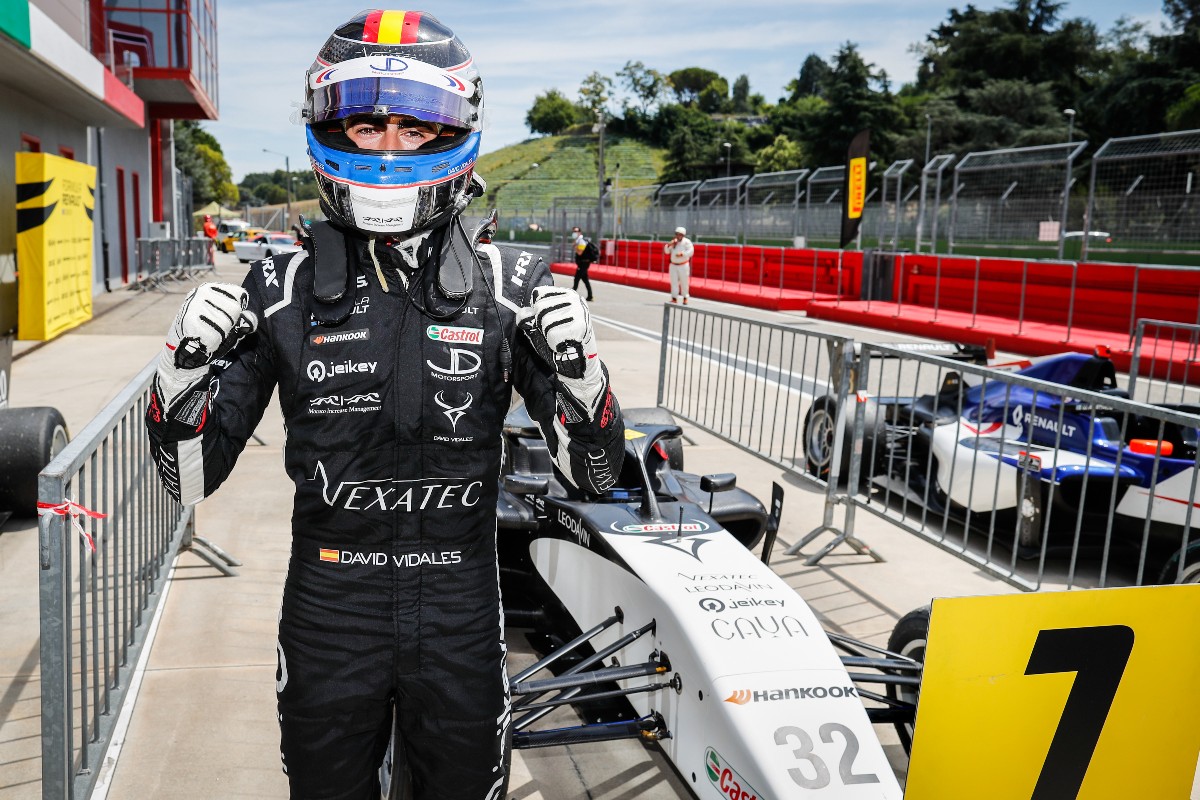 F1 is retaining its 2020 cars for next season as a cost-cutting measure, but the arrival of more complex and expensive hybrid technologies it still on its way in junior single-seaters and will not be good news for Spanish Formula 4 – where most Spanish talents make their first car racing steps and which has recently restructured to ensure it remains an attractive series with competitive grids in the long term.

Alonso’s comeback will have nostalgic value, but a driver who will be turning 39 tomorrow will probably not capture the imaginations of Spanish youths today. While Alonso does have a team in the Eurocup that runs under his own name and tested the youngster back in 2018, it’s telling that Spain’s next big star is driving for a rival outfit and without the financial backing that could have – but hasn’t – arrived from Alonso himself.

As for Sainz, he still needs to surpass the status of his World Rally Championship-winning father to get the same broad appeal that Alonso did, which requires being in a car that will enable him to win races and titles. But he too only made it to the top of the single-seater ladder thanks to his Spanish predecessors and the support of one of F1’s big teams.