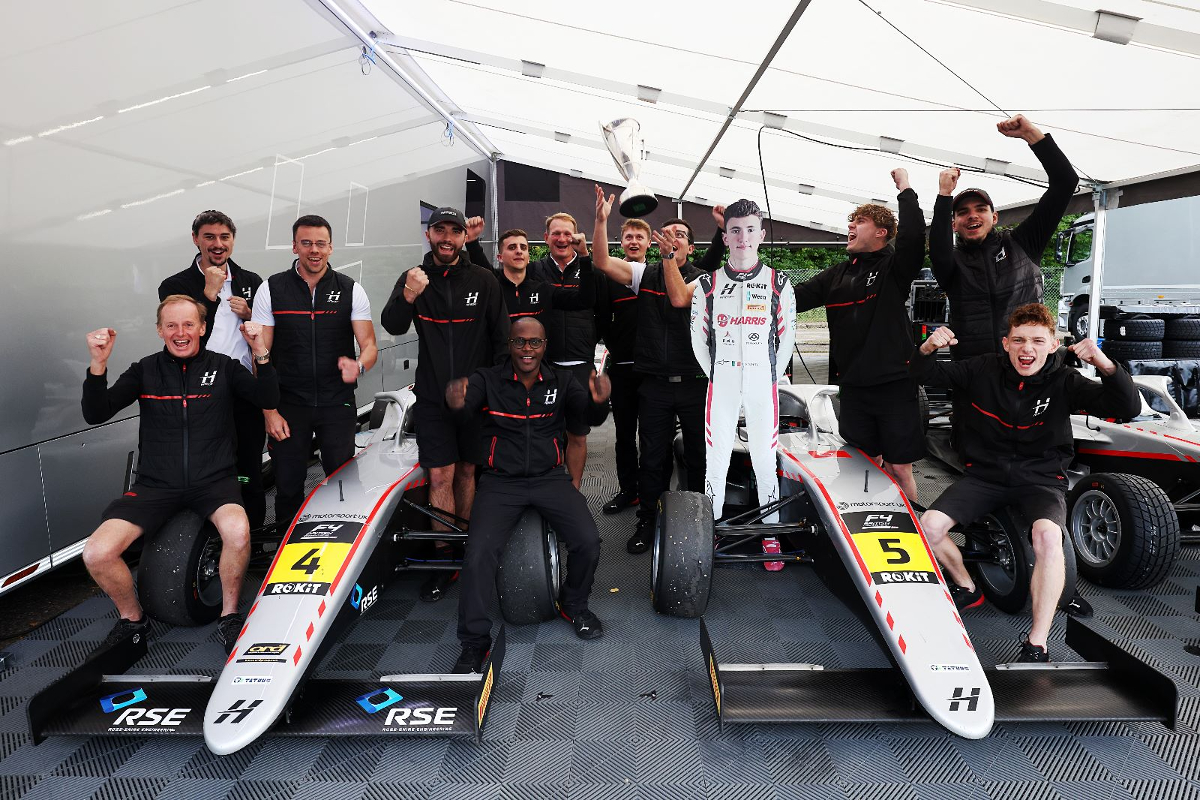 2022 was the start of a new era for British F4. A completely new car greeted teams and drivers at the start of the season, although a few recognised it from the F4 UAE series that began the year’s single-seater action

Drivers racing in a European junior series alongside the British Formula 4 championship is nothing new, but the remodelling which brought the British series in line with continental counterparts made juggling duel campaigns easier than ever.

While overall it was good for the category, and drivers, it made for a bizarre season finale in Britain where the champion-elect was not present.

“To be honest, probably not,” British F4 champion Alex Dunne said, when asked if he would have entered the series if it had not adopted the new Tatuus T-421.

“I think doing it in two different cars doesn’t really make sense. It can maybe help in one championship and hinder the other. The main deciding factor was that it was the same car and same tyres [as in Italy].

“That’s definitely a really important point. The fact that I never had to get used to the different things when switching between the different championships, always the same car, everything’s the same, tyres are the same. The same feeling, with the exception of slight set-up changes between the teamst then everything’s the same, so that was quite helpful for me. In the end it helped a lot with extra seat time too.”

After racing part-time in Germany and Spain’s championships last year as a rookie, with both using the first-generation Tatuus T-014 car, Dunne began 2022 by coming sixth in F4 United Arab Emirates with Hitech GP. After that he drove for the team in British F4 and dominated, then joined German squad US Racing in Italian F4 and came second in the championship. There were pros and cons to juggling the two European series, with extra seat time being an obvious benefit as well as both being challenging series for different reasons. 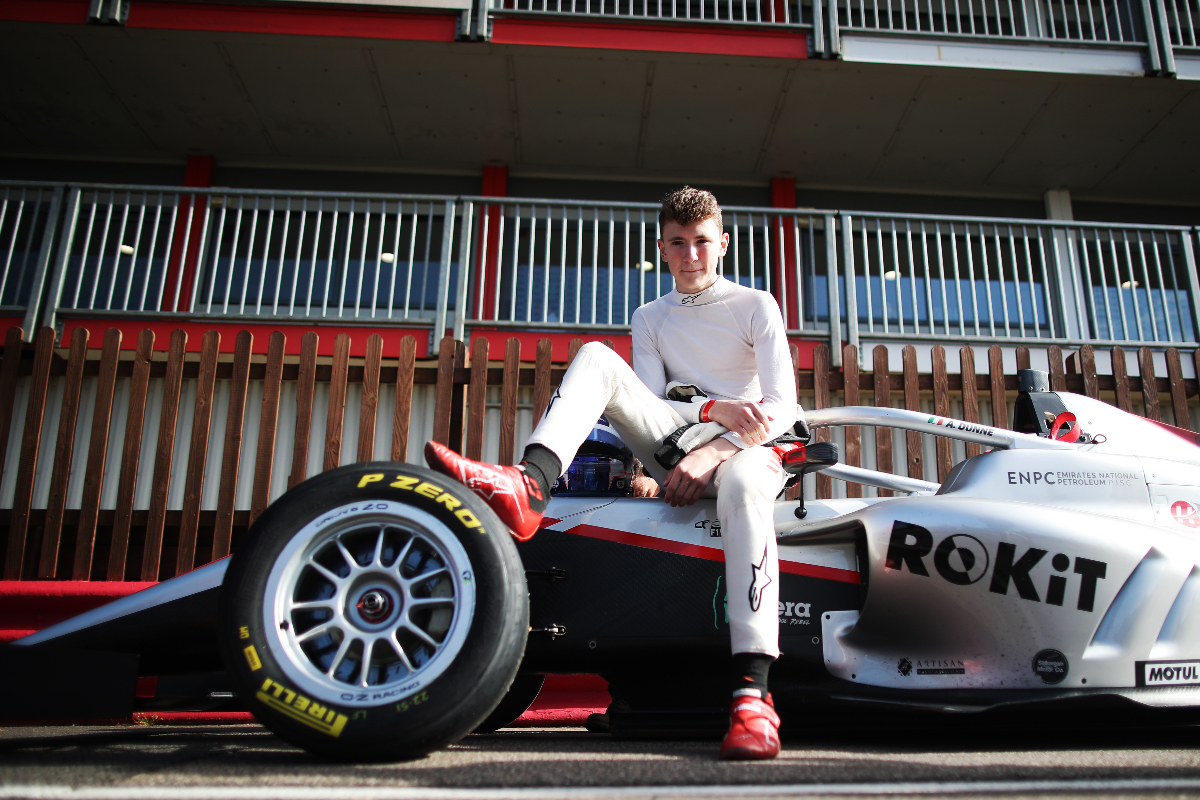 “British F4 definitely helped,” Dunne said. “The tracks being quite a lot shorter, but also quite a lot tighter, in different situations it helps a lot. Looking for different opportunities to overtake has really helped a lot, especially having the reversed-grid race thrown in there as well was really helpful. In places like Oulton Park where it’s really tricky to overtake and you have to be careful of the dirty air, you have to make sure you’re patient with your overtakes.

“I’ve learned and developed a lot as a driver, working with two different teams who in the end had the same goal but two very different ways of working towards it. It’s been really helpful to learn and mature as the year went on, and also six weeks in the UAE with Hitech helped as well. As an all-round driver I’ve improved a lot this year.”

The main “con” of running the two campaigns was obvious when the calendars were announced. British F4’s season finale at Brands Hatch clashed with the penultimate round of Italian F4 at Monza. With Dunne fighting at the front of the order in both series by the time it reached the month of those two events, it meant a difficult decision had to be made.

“I always said I was going to decide when the time comes but I think after the dominance we had at the start of the year at Donington Park [in British F4], I had good idea of what we were going to do.

“We weighed it up throughout the year and after what we achieved I knew we were probably going to end up doing Monza.

“After Donington and after a couple of rounds that we did, we were always at the sharp end, pace was always really good, I was pretty confident that we could wrap it up a round early. I knew it was going to be tough but I was confident that it was definitely possible.”

And it was possible for Dunne to be crowned British F4 champion at Silverstone, the penultimate round of the season. He came into the weekend 106 points ahead of his closest rival Ollie Gray, but it was a difficult weekend for Dunne, only the second of the season where he went without a win. 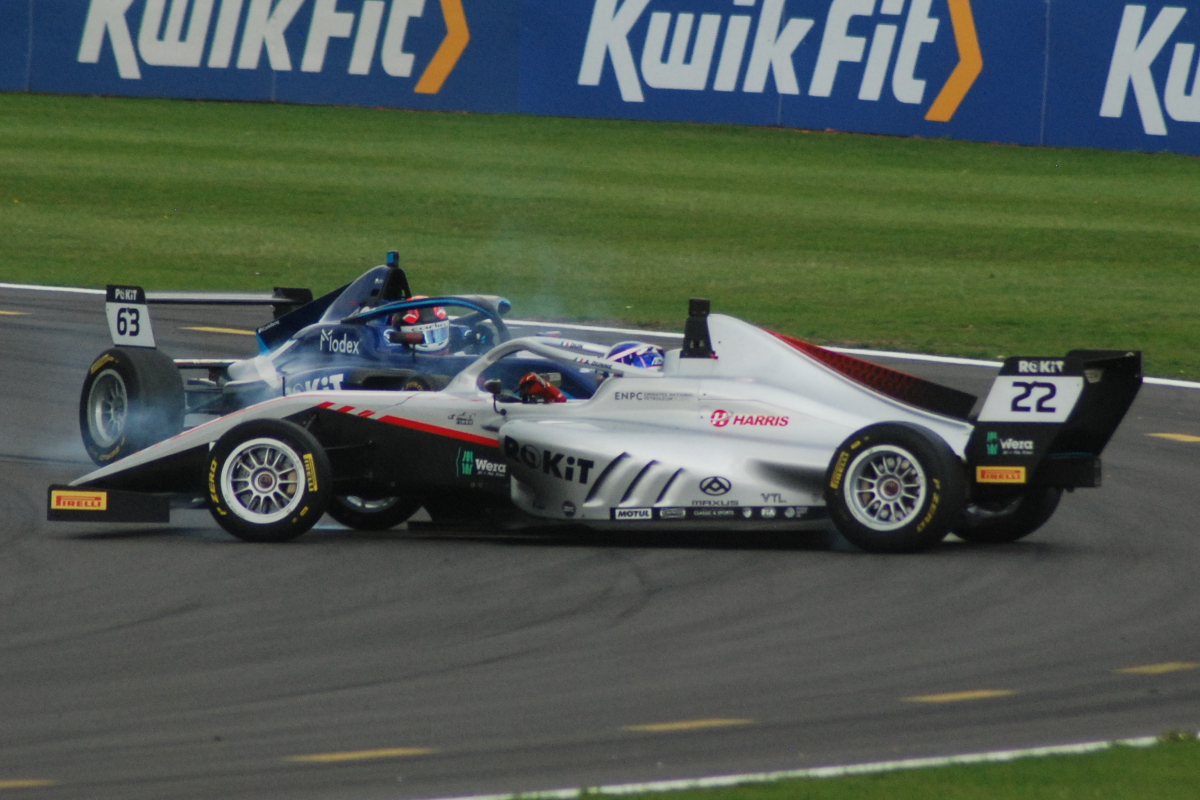 To make matters worse, Carlin appealed a penalty Gray acquired at Silverstone [from the incident pictured above], and the appeal was to be heard after the finale. It meant the final championship standings wouldn’t be settled until after Brands.

But with Gray needing a perfect final round to snatch the title, Dunne made the decision to head to Monza. It was ultimately the right one. Gray was unable to achieve the almost impossible, and the points scored in Italy moved Dunne up to second in the standings there. But it made for a strange end of the season.

While at Monza, just after qualifying fifth for the opening race of the weekend, Dunne sat and watched British F4 qualifying.

“I had a little bit of celebration with my dad. It was definitely a happy moment. But I was racing in Monza so I had some more races there to focus on.

“I was really disappointed not to be able to be at Brands. I’ve seen some videos of my cardboard cutout having some fun at the party which was quite funny. I would have loved to have been there. Unfortunately I wasn’t able to be. It was definitely disappointing not to be able to celebrate my first championship [win] with the team.

“[But] it definitely was the right decision. It was more important for my career to go to Monza. It’s good for the CV as well to be top three in Italian F4 and win the British championship. I think it was definitely a better choice for us and my career, moving forwards as well.”

Feature: When two eras meet: How F4 Gen1 and Gen2 compare in the cockpit