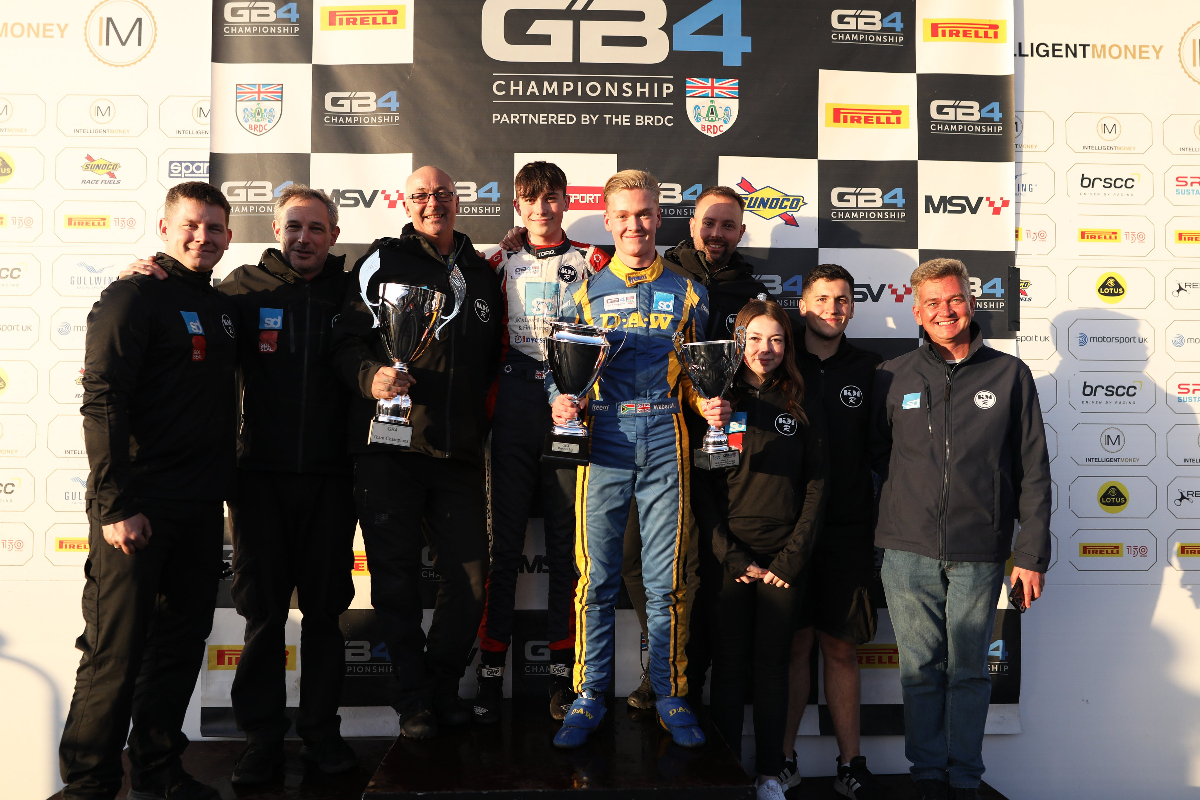 Kevin Mills Racing had a weekend to remember in the GB4 season finale at Donington Park, taking all three wins and the teams’ title.

Its eponymous owner was in disbelief afterwards, admitting KMR were “green” when the season began, having stepped up to slicks-and-wings racing in the Formula 4-based series from Formula Ford 1600.

“We’ve done a lot of development on the car and the drivers have got a lot better but to win all three races is quite amazing, I don’t think we were even believing that.”

Mills’ son Tom scored his second win in race one, but was involved in a couple of incidents and retired in race two where team-mate Jarrod Waberski won. The South African also won the finale – his fourth victory – as rival outfit Hillspeed was hampered by a collision between its drivers Megan Gilkes and Max Marzorati, who lost second in the championship to Waberski.

“Tom had a bit of bad luck in the second race, the other drivers that made contact with him both got reprimands,” Mills continued.

“Luckily we just did enough in the last race and then the two Hillspeed cars managed to make contact with each other. Quite amazing, I can’t believe it.”

Mills was pleased with his drivers’ seasons, with 2021 South African F1600 runner-up Waberski only flying over on the eve of the campaign while Mills Jr stepped up after debuting in FF1600 last year.

“You’ve got to remember that Jarrod came to this country and had never seen any of these tracks. It was so alien to him,” said Mills.

“He did no pre-season testing. Tom, coming from only eight months of racing in a FFord, and it’s such a different championship this, much harder to drive. Everything about it is different.

“You knew they were both going to get better and better.  From mid-season, Snetterton onwards, they have shown their class, both of them.”

Mills also credited the pair for early-season podiums while KMR was still dialling its cars in.

“When I look back now how much we’ve learned during the season, we were really green at the first round, we got some good podiums there, that was the drivers dragging it out of it.

“It was a cold surface, the tyres were graining, the drivers’ skills got us those podiums. But, when it started to warm up we lost our way a bit for a couple of rounds. We had to work quite hard at that.

“[Some teams] had experience already of the tyre, they used it in GB3, and even the tub. We’d never done slicks-and-wings before this year, it’s been a massively-steep learning curve.”

The GB4 title followed Jordan Dempsey being crowned BRSCC National FF1600 champion with KMR, and this weekend it aims to win the Walter Hayes Trophy for a sixth time.

“Looking forward to the future, hopefully we can have a strong team and go for it again [in GB4] next year,” Mills concluded.