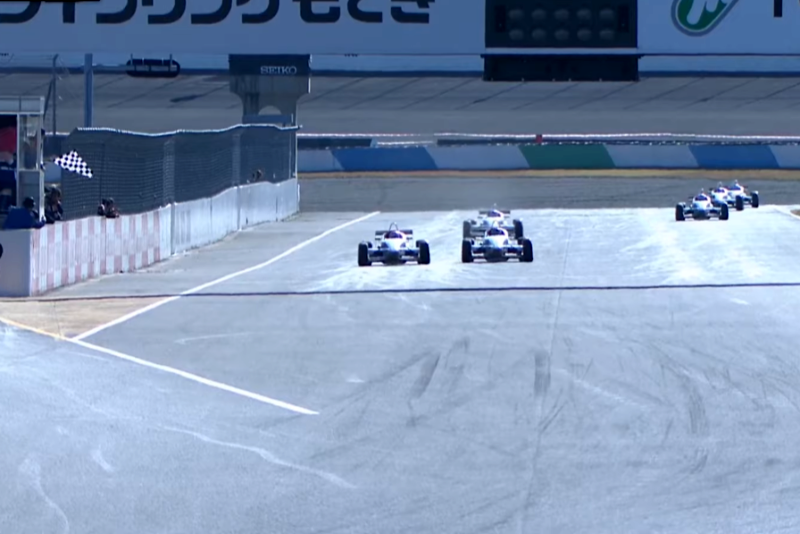 The first race used the winged junior single-seater chassis from SRS-Formula, a 25-year-old championship that is run by Suzuka Circuit Racing School.

Former Formula 1 driver Takuma Sato, a SCRS graduate in 1997, is now principal of SRS-F and SRS-Kart and assembled some of his fellow Japanese stars to race his training cars in a six-lap encounter.

The massively experienced Sato left his grid box early on the warm-up lap, then lost his lead by going wide at the second apex of Turn 1. Izawa profited, but had lost the place a lap later to Nojiri.

Nojiri established a healthy lead, as Sato settled in second. On lap four, Sato went too deep into the downhill Turn 11 and conceded his place to Tsukakoshi, then backed off down the pit straight to start a fight for third with Izawa and Makino.

Makino edged past Izawa at Turn 11 on the penultimate lap, while Tsukakoshi started hunting down leader Nojiri.

Nojiri went unusually slow on the last lap, meaning Tsukakoshi was on his gearbox by Turn 10. He couldn’t get a move done before the sweeping final few corners, but managed to pull alongside down the pit straight and pipped Nojiri to victory in a photo finish.

Sato also slowed up so that he was only just ahead of Makino as they met the chequered flag, which was being waved by Toro Rosso F1 driver Daniil Kvyat and a young fan. Izawa beat Natori to fifth, while Fukuzumi finished a very distant seventh. Two-time SF champion Yamamoto, who admitted he had joined in for fun, retired in the pits.

Yamamoto passed Makino for the lead within two corners, while bad starts for Tsukakoshi and Auer left them way behind.

Fukuzumi made a brilliant move around the outside of Turn 9 to claim second from Makino on lap one, but Makino reclaimed it a corner later.

Makino took the lead at the start of lap two, with Yamamoto snatching it back on lap three at the Turn 7 sweep. Nojiri followed him through two corners later, then took the lead himself at Turn 1.

Fukuzumi passed three cars in nine corners to then move into first, but was there for a few seconds at Nojiri got back past. Yamamoto slipstreamed past both at Turn 11, but Nojiri was back ahead a few corners later.

Auer meanwhile was on a charge, going from fourth to first on lap five. He was passed by Yamamoto, but triumphed in a side-by-side battle through the final corners of lap seven to take victory.