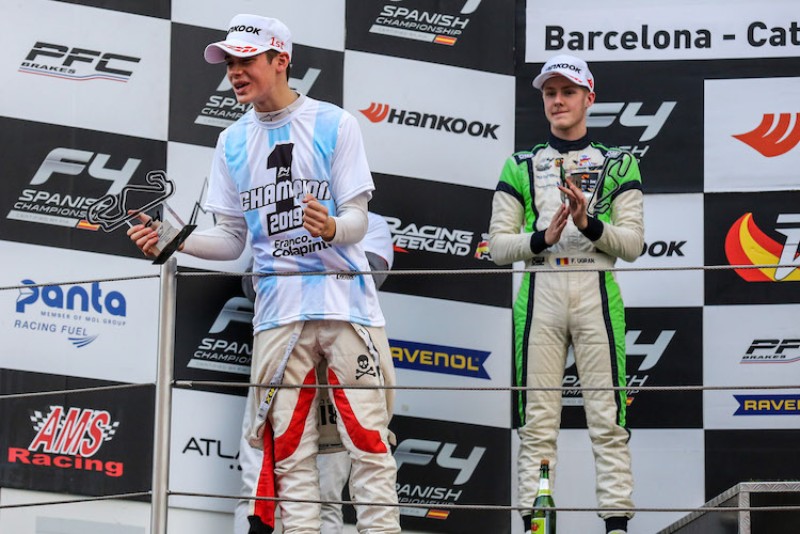 Franco Colapinto won the Spanish Formula 4 title at Barcelona, as he dominated the season finale.

The Argentinian won the first race from pole, despite a lap one error. Jenzer Motorsport’s Filip Ugran had qualified second for his series debut and was alongside Colapinto by Turn 1. The Romanian was on the outside, and had to take to the escape road as Colapinto – on the inside – missed the corner entry.

Colapinto kept his lead despite this, with MP Motorsport’s Glenn van Berlo passing Ugran for second a few corners later. G4 Racing’s Axel Gnos made it a four-car train at the front, and pressured Ugran through the early laps.

Nicolas Baert (MP) also joined in, filling Gnos’s mirrors and allowing Ugran to concentrate on passing van Berlo. He managed the feat on lap 10 of 15, pressuring hard into Turn 1 then sneaking through at Turn 2.

Colapinto was clear up front, and sealed the title with his ninth win of the season.

After a pointless race one, MP’s Tijmen van der Helm struck back with a race two podium, but had no answer to Colapinto and Ugran’s pace.

Van der Helm started the race with a Turn 1 off, but stuck in third behind Colapinto and Gnos.

Ugran started further down the order but by mid-distance was on their tails, and braked late to go from fourth to second at Turn 1. Gnos was dispatched by van der Helm a lap later to reclaim third, with Meyer and van Berlo then also passing Gnos.

Van Berlo took pole for race three, ahead of Gnos and Colapinto – who was immediately up to second after Gnos stalled. By the uphill Turn 7, he had the lead.

While there was a safety car intervention, caused by French F4 Junior driver Paul-Adrien Pallot crashing, Colapinto never came under pressure and won. A late charge by Ugran brought him up to third behind van Berlo, who took second in the standings after Meyer failed to score.