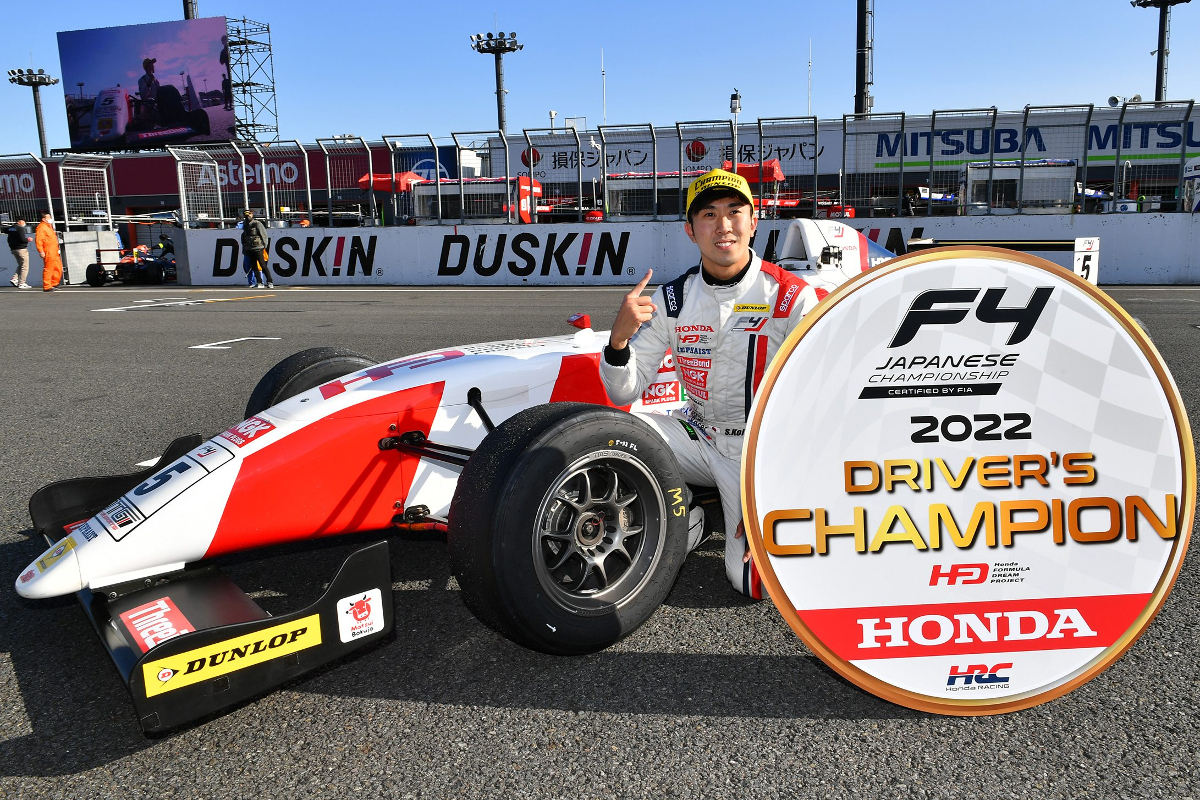 Syun Koide became the third Honda junior to win the Japanese Formula 4 championship with victory in the final round of the season at Twin Ring Motegi.

Koide came into the weekend as points leader, with only team-mate Yusuke Mitsui able to beat him to the crown.

Both were bettered in qualifying by Toyota junior Rikuto Kobayashi, who set the pace for the first time and claimed two dominant pole positions. Koide qualified second for both races, ahead of Toyota’s Rin Arakawa and Mitsui.

Kobayashi was able to convert pole position into his first win, and only his second podium of the season. He made a strong start and kept Koide at bay for the distance, while Arakawa had to defend hard from Mitsui on lap one and then again on lap four.

The race was neutralised on lap five after Takumi Sato and Wataru Yoshimura collided exiting the turn 11 right-hander, and Kobayashi did enough to hold off Koide again on the restart.

There was then another safety car period after Hirobon went off in the gravel, and the second restart left the field with four laps of racing to go.

Once again, Kobayashi led the way without issue and then was able to build up a lead as Koide came under pressure from Arakawa on lap 11 of 13 and then again on the next lap with Mitsui and Yugo Iwasawa just behind too.

The top four ended up finishing as they started, although a last-lap move by Iwasawa on Mitsui at turn 11 went wrong and meant he lost fifth place to Jiei Okuzumi who had started ninth, passed Reimei Ito on lap two, cleared Jin Nakamura at the first restart and then passed Gento Miyashita after going side-by-side for several corners on the second restart lap.

Independent Cup champion Yutaka Toriba spent much of the race driving with a broken front wing after contact with HIROBON.

Race two was put under safety conditions even quicker than race one, as a huge crash at the start paused proceedings.

Rio Shimono stalled, and was collected by Yoshitsugu Kondo and then “Syuji” made contact too. During the clear-up, the field had to head through the pitlane for two laps before the restart at the end of lap four. Except once the restart signal was sent, Hikaru Jitosho crashed out just after the crest on the straight leading to turn 11.

The top two broke away at the restart, with Miyashita getting ahead of Mitsui for fourth place. Koide attacked Kobayashi for the lead several times, eventually getting it done at turn 11 after the pair reached a green flag following double waved yellows were Jitosho was.

They continued to run side-by-side until a failed attempt to reclaim the lead the next lap sent Kobayashi briefly into the gravel and dropped him to fourth.

The safety car was out again soon after Ito went off, and after that Koide pulled away to win and claim the championship title.

Kobayashi meanwhile lost further ground, making contact with Mitsui on the last lap and finishing sixth. Behind the winner were Arakawa, Miyashita, Mitsui and Nakamura.