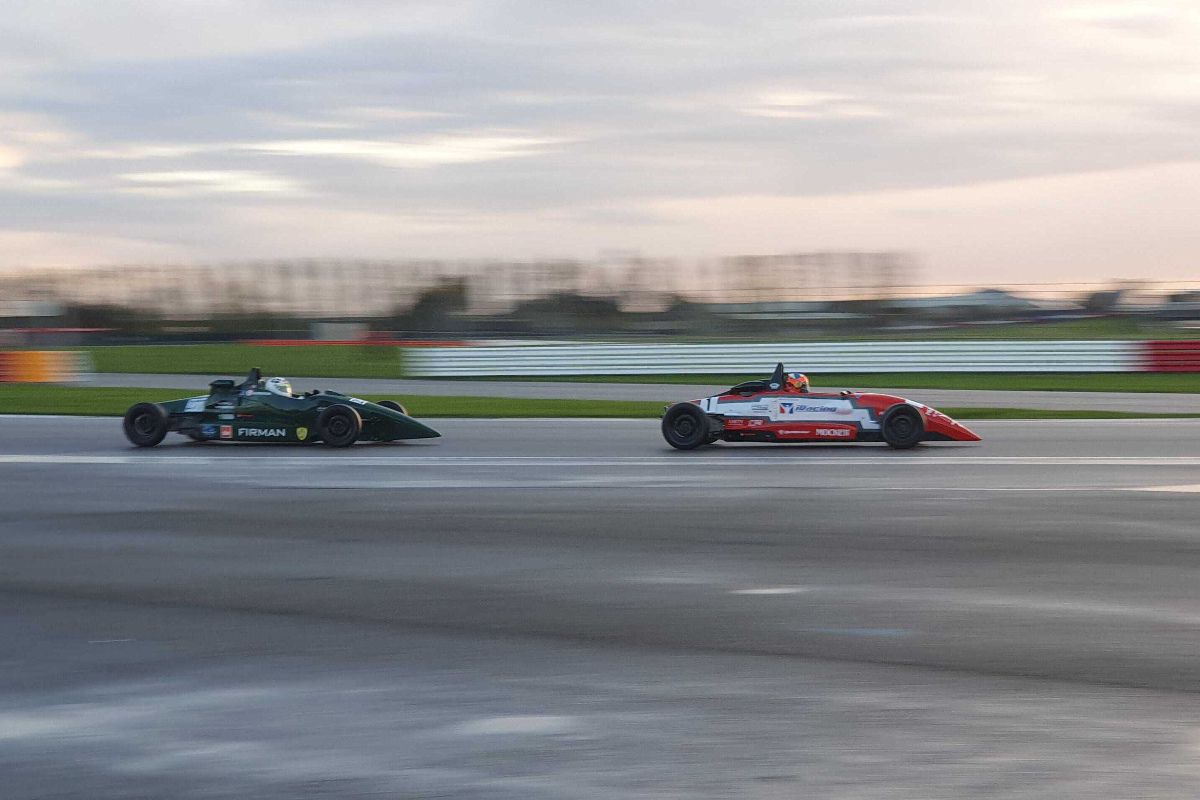 It would have been Esterson’s third end-of-year showpiece Formual Ford 1600 win in a row, having won last month’s FFord Festival in addition to the 2021 WHT.

The race started on a wet track following a rain shower earlier in the afternoon. Esterson and Foster shared the front row, with Esterson leading into Copse while Foster dropped behind KMR’s Tom Mills.

Eastwell moved into fourth ahead of Josh Fisher, with Lucas Romanek part of the lead group early on in sixth.

Foster started to come under pressure for third from Eastwell, who was the fastest driver on track early on. On lap six he swept around the outside of the Firman at Brooklands before completing the overtake into Luffield.

Esterson set the fastest lap to edge 0.4 seconds clear at the front, but then ran wide into Brooklands on lap eight. Mills pounced on the outside into Luffield, but Esterson again slid wide, with contact sending Mills off the road and down to sixth.

Meanwhile Foster moved back past Eastwell, and was soon onto the tail of Esterson, who appeared to be struggling. After making a couple of stabs for the lead, Foster had to back out into Luffield which almost allowed Eastwell through.

Esterson eventually managed to find more pace and edge clear, but Foster set the fastest lap on the penultimate tour to close back in. Both ran wide out of Copse on the final lap, but the order stayed the same until the chequered flag.

Eastwell was a second adrift in third and almost two seconds clear of Fisher. Mills passed Romanek late on to take fifth. He immediately appealed the race result after returning to the pits, and after a lengthy process the clerk of the course decided to penalise Esterson 4.5s to drop him behind Mills. Ammonite Motorsport then appealed that decision, but the stewards did not accept the appeal after hearing it and two-and-a-half hours after the finish the result was official as the clerk’s decision stood.

Border Reivers’ James Penrose had finished ninth on the road, but got a 10s penalty “for gaining an advantage”.

Michael Moyers was 10th ahead of Julian Van der Watt and Chris Middlehurst. David McCullough was 13th ahead of Luke Cooper, who was pleased with his pace as he made great progress from 28th on the grid.

Adam Higgins retired on lap one, while Blanchard also stopped after a collision with Campbell.

B-M Racing’s Tom McArthur pulled off at Woodcote late on after colliding with a spinning car, while Foster’s team-mate Ollie White retired on the last lap by pulling into the pits.