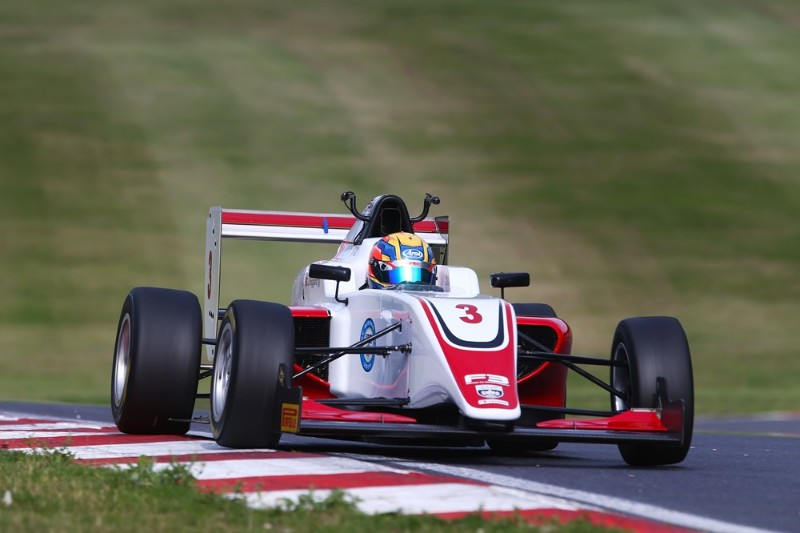 Johnathan Hoggard dominated in qualifying to claim pole position for the first and third BRDC British Formula 3 this weekend at Brands Hatch.

The Fortec Motorsports driver went top of the times with around eight minutes to go in the 20-minute session with a 1m20.877s lap, before going even quicker around Brands Hatch’s Grand Prix layout.

The two lap times were both good enough for race one pole, with Douglas Motorsport’s Kiern Jewiss – who will start alongside – the only other driver to set a lap time underneath 1m21s.

Qualifying was stopped after five minutes to retrieve Hampus Ericsson’s car after he went off at the exit of Westfield. Hoggard led British F3 points leader Clement Novalak at the time by 0.002s, and just before Hoggard set his best times Novalak had displaced him at the top.

Novalak later improved on his 1m21.185s lap, and the Carlin driver will start the first race from third alongside Hillspeed’s Sasakorn Chaimongkol, who was one of the few drivers to improve late on in the session.

Carlin’s Kaylen Frederick qualified fifth fastest and will line up alongside Douglas Motorsport’s Ulysse de Pauw, with Manuel Maldonado and Neil Verhagen occupying the fourth row of the grid for race one behind. On second fastest times, de Pauw takes up fourth place on the grid for race three.

Lucas Petersson and Benjamin Pedersen complete the top 10 for the start of race one on Saturday with Ayrton Simmons – who is currently third in the championship standings -? starting behind the pair in 11th.