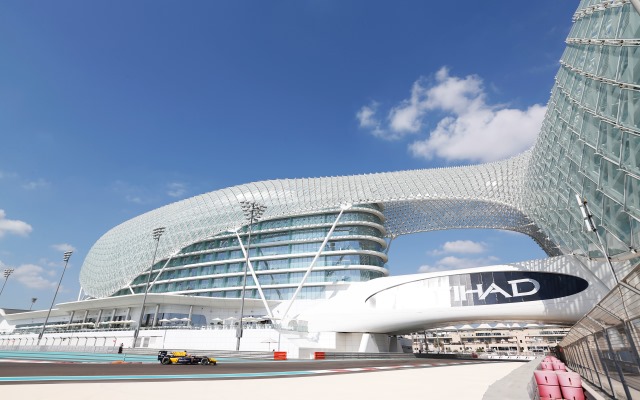 The final race of the 2015 GP2 season was cancelled after a big opening lap crash caused it to be stopped.

The crash was triggered by Pierre Gasly spinning in front of the field out of Turn 2 and as he continued to rotate, he was clipped by Norman Nato.

Nato headed straight for the Turn 3 barrier taking Sean Gelael and Daniel De Jong with him, with Nicholas Latifi following in behind after punting Artem Markelov around.

Despite the ferocity of the incident, all drivers were quickly out of their cars and seemingly unharmed.

Reverse-grid pole-sitter Alex Lynn had defended the lead off the start from Rio Haryanto, but any hopes of adding a third win of the year were dashed by the race’s cancellation.

After the cars were recovered, the Tecpro barriers were in the process of being rebuilt but with little time remaining before the start of activities before the Formula 1 race, the GP2 finale was called off.

With no points awarded, the cancellation had a number of implications on the final championship standings.

While Stoffel Vandoorne and Alexander Rossi were already confirmed in the top two places, Sergey Sirotkin‘s third place had been under threat from Rio Haryanto and Mitch Evans, particularly after he was also taken out in first-lap contact.

He now keeps hold of the place though, while there is a three-way tie for sixth between Lynn, Raffaele Marciello and Gasly after none of them were able to add to their tallies.

There’s also a three-way tie for 10th behind Nobuharu Matsushita, but holding onto the position despite his absence from the final two rounds was two-time winner Richie Stanaway, ahead of Arthur Pic and Jordan King – the latter was running in third place on the first lap.

Vandoorne had stalled on the grid for what would have been his last ever GP2 race.