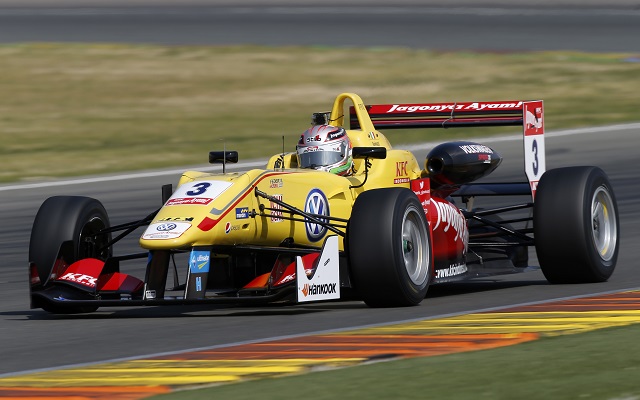 The order of the top three was unchanged in the afternoon session on the first day of pre-season testing for the FIA F3 European Championship at Valencia, with Antonio Giovinazzi again leading rookies George Russell and Charles Leclerc.

Just as in the morning, Giovinazzi was the only driver to set a time within the 1m24s, this time shaving 11 thousandths of his earlier benchmark to post a 1m24.755s.

BRDC F4 champion Russell was fractionally slower than in the morning, 0.288s behind his Carlin team-mate, while Leclerc was again just within four tenths off the pace for Van Amersfoort Racing.

His fellow Formula Renault 2.0 graduate?Alex Albon improved to take fourth in the afternoon for Signature, ahead of Leclerc’s team-mate Arjun Maini.

Mucke Motorsport’s pair of ADAC Formel Masters graduates Mikkel Jensen and Maximilian Gunther were sixth and seventh, and the top Mercedes-powered runners, with Gunther continuing his strong showing from the morning, when he was fourth fastest.

The third VAR car of Alessio Lorandi failed to complete a timed lap due to gearbox problems, while Motopark’s Sam MacLeod missed out entirely after only doing four laps in the morning.

Michael Waldherr teams up with Motopark in ADAC F4