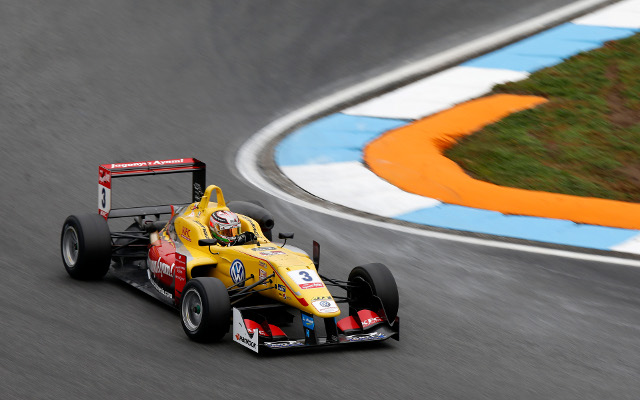 FIA Formula 3 European champion Felix Rosenqvist‘s run of pole positions was halted by Antonio Giovinazzi?and?Jake Dennis in the final qualifying session of the year at Hockenheim.

Giovinazzi, who had only mustered ninth in the day’s earlier qualifying session, beat Dennis to top spot and race two pole with a last lap of 1m32.089s, just two thousandths of a second faster than the Briton.

Racing Steps Foundation protege Dennis came out on top in the second-best times classification to head Giovinazzi on the grid for race three.

Rosenqvist had been looking to take his tally of poles for the season above 17 and extend his streak of consecutive poles beyond six.

He briefly led the times but couldn’t match the final few? efforts from Giovinazzi and Dennis and will have to settle for third on the grid for the final two races of the campaign.

In HitechGP’s second appearance in the series, Alexander Sims?edged out Prema newcomer?Maximilian Gunther for fourth at the end of the session.

Charles Leclerc‘s chances of overhauling a six-point deficit to Giovinazzi in their battle for second in the standings now look slim after only managing 12th. He’s in danger of losing third to Dennis, too.

Sims’ ascent up the order came relatively late and his second-fastest time was not so good, dropping him behind Gunther, Albon, Russell, Jensen and Pommer on the race three grid.

Stroll will be 10th, with Leclerc a lowly 16th.