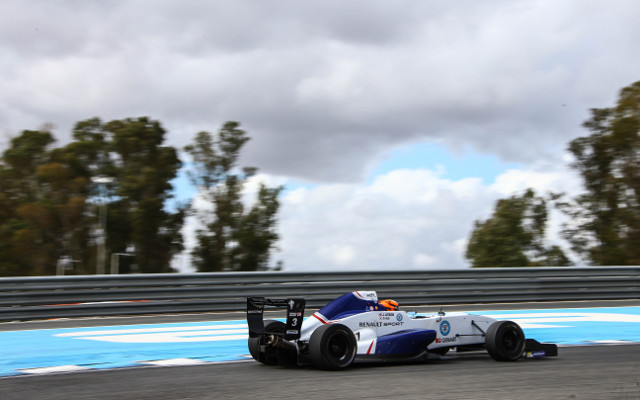 Jack Aitken has claimed an crucial advantage in the Eurocup Formula Renault 2.0 title decider at Jerez by taking pole for the first two races of the weekend.

The Briton came into the event with a seven-point deficit to Louis Deletraz and Kevin Jorg but is now on course to overturn that after beating Jorg to the fastest time.

Aitken, who won the Alps title at the same circuit one week ago, topped the first of the two groups with a time of 1m39.989s ahead of fellow contenders Ben Barnicoat and Deletraz.

Jorg set the best time from the second group but mid-session rain prevented him from matching Aitken, forcing him to settle for a 1m40.457s and a place on the front row.

Ignazio D’Agosto was second in group B behind Jorg, with Dennis Olsen third.

The rain caught out title contender Anthoine Hubert after his Tech 1 team held him back in the pits at the start of the second session.

By the time he could set a flying lap the circuit was wet, and although he was able to improve his time after a red flag period caused by a crash for Denis Bulatov, the Frenchman ended up eighth in his group and 16th on the grid for both races.

The order at the front of group A was the same on the classification of second-fastest times that sets the grid for race two with Aitken leading Barnicoat and Deletraz.

In group B, D’Agosto beat Jorg to the front row, giving the Swiss driver more work to do to prevent Aitken from ending the day leading the championship.

Ukyo Sasahara, Alexey Korneev, Matevos Isaakyan and Jake Hughes will fill places seven to 10 on the grid for race one, with the order for race two being Isaakyan, Hughes,?Sasahara and Thiago Vivacqua.