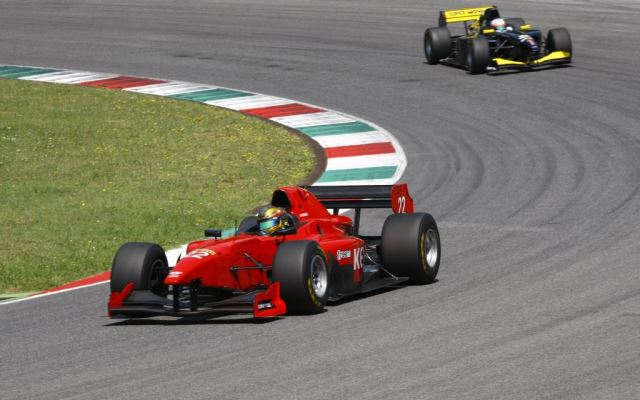 For the second time in his four-race Auto GP career, Kevin Giovesi lost a victory to Narain Karthikeyan due to a post-race penalty in race two at Mugello.

Starting seventh, Giovesi made a super start, managing to take the lead down the inside of Yoshitaka Kuroda at the first corner.

He quickly opened up a three-second advantage over Karthikeyan during the opening stint, and although he had a smaller advantage of around a second after making a later pitstop than his rival, he held on to cross the finish line first.

Stewards however ruled that his start was too good, and he was handed a 25-second penalty for abusing the track limits as he charged up the order off the line.

Vittorio Ghirelli finished ten seconds behind Karthikeyan to complete what became a one-two finish for Super Nova. Kimiya Sato inherited the final podium spot after a productive race, with Giovesi’s penalty bringing the Japanese driver level on points with Sergio Campana, who failed to score after a slow pitstop.

Tamas Pal Kiss was classified in fourth ahead of the penalised Giovesi. Sixth and seventh were Dutch MP duo Meindert van Buuren and Daniel De Jong, while Kuroda completed the top eight after slipping back early on. Christian Klien could only manage ninth after starting on pole.