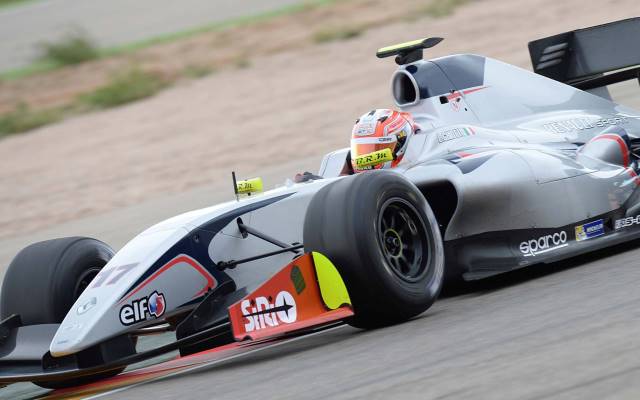 Luca Ghiotto will step up to Formula Renault 3.5 this year with Draco, the team has confirmed.

The Italian, who turns 19 this month, finished ninth in Eurocup Formula Renault 2.0 in 2012 for Prema, claiming one race win at Spa-Francorchamps.

He also won the non-championship Pau Grand Prix and finished second behind Ferrari protege Antonio Fuoco in the Alps championship. He previously spent two seasons in Formula Abarth, finishing sixth in 2011 and second in 2012.

Ghiotto spent three days of FR3.5 post-season testing with the Pons team before switching to Draco for his fourth day. He joins Pietro Fantin at the Italian team, who finished third in the 2013 standings with Nico Muller and Andre Negrao, who have moved on to the DTM and GP2 respectively.

“Our team is Brazilian, but our headquarters are in Italy and the majority of our staff are Italian,” said Guto Negrao, team owner and father of Andre. “For such reasons, having both nationalities represented in our drivers makes us very proud, and fits perfectly with our team?s soul.

“I am delighted by our line-up: on one side Fantin is ready to make the most of his previous experience in the series, while Ghiotto?s programme will be aimed to a steady progression, something we deem essential for a rookie. That?s why he?s in our plans for 2015 too.

“Luca managed to surprise us in Alcaniz with an extremely focused and professional approach, something we didn?t expect in such a young driver. That?s what convinced us that he was the right guy for Draco, and we are really looking forward to the start of the season.”