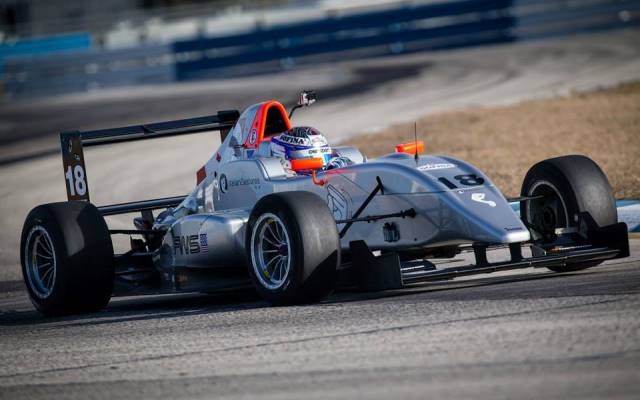 Canadian racer Nicholas Latifi picked up his first victory in the Florida Winter Series as he successfully defended the lead from Raffaele Marciello throughout the reverse-grid race at Palm Beach.

While Vasily Romanov and Alex Bosak started the race on front row, both of them wound up slipping down the order during the early laps. Having started on row two, Latifi entered the lead by the end of lap one, setting up a confident drive until the checkered flag.

The race leader soon came under pressure from Marciello, who firmly settled within a second of Latifi and proceeded to close in bit by bit with every lap. However, the Italian wound find no overtaking opportunities over the next 25 minutes and had to settle for second at the line.

Dennis van de Laar ran in third early on, but had a moment that dropped him behind single-seater rookie Lance Stroll. The FDA protege then made the most out of the opportunity and held on to the position for the rest of the race, taking his first podium in cars.

Tatiana Calderon took fifth, ahead of Ed Jones, who had overtaken Max Verstappen in the closing stages of the event. Romanov took eighth behind the Dutchman, with Takashi Kasai in ninth. GP2/GP3 commentator Will Buxton enjoyed a calm race and recorded a tenth-place finish.

Antonio Fuoco had a tough race, ending up stuck behind Bosak during the early laps before pitting in for front wing repairs. With Bosak himself retiring shortly thereafter, the Italian rejoined in 11th and rounded out the field.