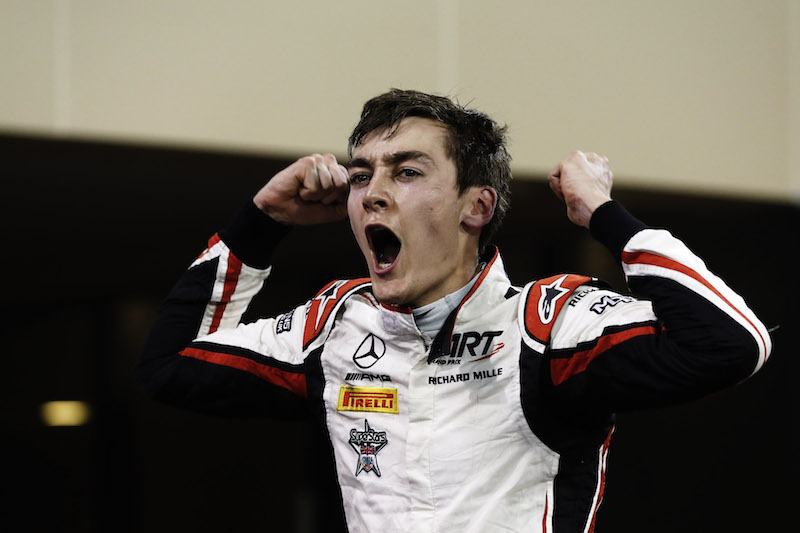 George Russell sealed the Formula 2 title with his seventh victory of the year in the Abu Dhabi feature race, recovering after losing the lead to Nyck de Vries at the start.

Pole-sitter Russell lost out to de Vries after a slow getaway, but his title was virtually guaranteed at the same moment when his remaining rival Alex Albon – who needed to win the race to keep the title fight alive – was one of several drivers to stall on the grid.

Albon’s DAMS team-mate Nicholas Latifi also stalled and was hit at speed by an unsighted Arjun Maini. Both drivers escaped from the huge impact unhurt, but a lengthy safety car period was required.

The restart came at the end of lap six, when the pit window opened, removing the usual concern of making the supersoft tyres last the opening stint.

On the second lap of racing, Russell informed his ART Grand Prix team that he would pit if de Vries stayed out, with the Prema driver in turn instructed to stay out for one more lap.

When de Vries did pit, he emerged just ahead, but Russell immediately went down the inside of Turn 5 to claim the effective race lead.

Actually out front was Luca Ghiotto, who was the only driver not caught up in the start incident to be on the alternate strategy of starting on the soft tyres.

In the closing stages, Ghiotto began increasing his lead over Russell to as much as 24 seconds, but missed the Turns 9/10 chicane on one lap and was handed a five-second time penalty to be served at his pit-stop, from which he emerged in fifth position.

Artem Markelov came out on top of a mid-race battle with Lando Norris for third before taking second away from de Vries with eight minutes remaining.

Russell responded to the Russian veteran’s charge however to ensure he finished up 3.3 seconds clear.

Ghiotto, who had started a lowly 16th, emerged from his stop six seconds behind fourth-placed Norris with four minutes remaining, and managed to overtake both the Briton and de Vries to finish third.

Charouz drivers Louis Deletraz and Antonio Fuoco finished sixth and seventh ahead of Ghiotto’s Campos team-mate Roberto Merhi, who will start the final race of the year from reversed-grid pole.

Merhi just held off a charging Tadasuke Makino, while Jack Aitken took the final point in 10th, having made a superb pass around the outside of Merhi for sixth at the restart before struggling with tyres.

Albon, together with fellow staller Sergio Sette Camara, was able to start the race a lap down and then allowed to overtake the field under safety car, but could only finish 14th once he made a late change of tyres.

He remains second in the standings, but now by only four points over Norris.