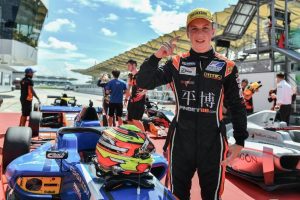 The 16-year-old started his first weekend in F3 by taking pole, and controlled the opening race from lights to flag bar a brief start line squabble with Tomoki Takahashi. Pinnacle Motorsport driver Lawson ended up taking victory by 8.717 seconds, with Super License’s Takahashi matching his best result in second.

Formula Renault Eurocup star Yifei Ye was overshadowed in third, and marked his first ever car race in his home continent. After missing the last round at Ningbo, James Yu returned with ZEN Motorsport and took fourth place.

All the focus was on Raoul Hyman though, who finished a fairly anonymous fifth. The Hitech GP driver is chasing his absent team-mate Jake Hughes for the title, and closed the gap down to 23 points. Euroformula Open champion Harrison Scott, replacing Hughes at Hitech, struggled to seventh, while Macanese driver Charles Leong faltered down in 13th.

Jaden Conwright, who could’ve matched Hughes on points had he won all three races, ended the race sixth for Absolute Racing.

By taking fastest lap in race one, Lawson also got to start the second race from the front, and once again dominated. This time Ye was his closest rival, albeit over 22 seconds behind. This time Lawson aced the start, moving several car lengths clear before the field reached Turn 1. Ye, Yu and Scott made chase, although had already lost two seconds to Lawson by the end of the first lap, while Conwright speared off the track and fell to the bottom of the field.

Hyman passed Scott for fourth on the second lap, but any hopes of taking the points lead from Hughes looked unlikely having lost almost 10 seconds to Lawson in three laps. Yu was still in reach though, and behind him Scott was trying to hold off BlackArts Racing’s Louis Prette.

Scott lost fifth position on lap seven, with Hyman punting off Yu at the final corner to move into third. Rather than moving on to the tail of Ye, he then dropped back, with Lawson extending his lead ever further. Such was the gap between Yu and Prette, he was still able to hold on to fourth behind Ye and Hyman.

Akash Gowda beat Akash Nandy to seventh, with Jeremy Wahome and Tom Beckhauser, who will be racing for BlackArts in Asian Formula Renault next year, completing the top 10.

Hyman goes into the final race of the season eight points behind Hughes, meaning he needs to finish fifth to secure the title. Leong can still beat Conwright to third in the standings, while Lawson could end the season in eighth despite only competing in one round.