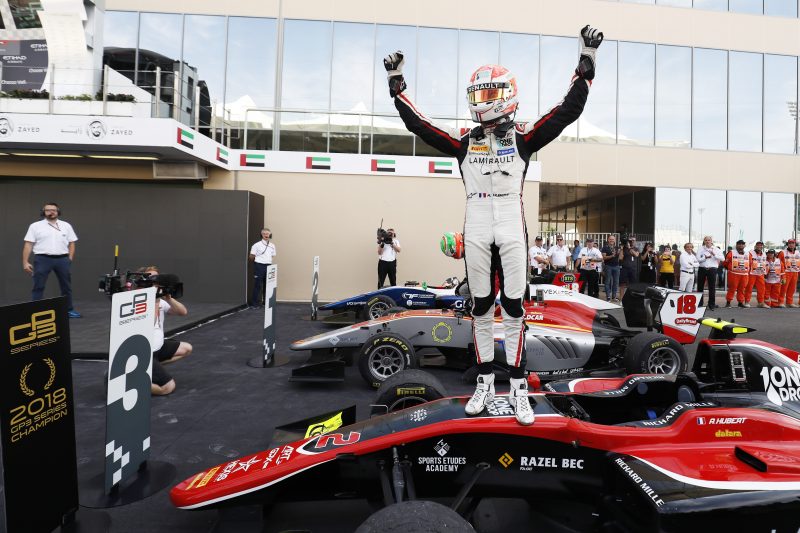 With ART Grand Prix’s Hubert running in a comfortable third for the majority of the race, championship challenger Mazepin needed to win and secure the fastest lap in order to take the title fight into Sunday’s finale.

Polesitter Mazepin lost the lead of the race on the opening lap, after Campos’ Leonardo Pulcini drafted past on the back straight. However, scooping the fastest lap on the next tour, Mazepin provisionally regained the required points by passing Pulcini to retake the lead on lap 4 of 18.

His title tilt was dashed with two mistakes under braking. First losing the lead to Pulcini after locking up and running wide at the 90 degree right-hander Turn 17, Mazepin later locked up at Turn 11 when challenging the Campos driver.

The Russian straight-lined the run-off area and bounced over the sausage kerb rather than driving to the right of a bollard. He was handed a 10-second time penalty which effectively ended his chances of remaining in championship contention.

Pulcini managed the remainder of the race to claim his second main race victory in a row as Mazepin, who still finished second on the road, gradually dropped back as the race progressed.

Hubert finished in third place. He was passed for second on the final lap by a charging David Beckmann, who had earlier dispatched both Callum Ilott and Jake Hughes in order to catch the newly crowned champion.

Ilott had battled with Hughes throughout the majority of the race, with the two exchanging places twice before Ilott was able to pull away in the closing stages. Hughes’s pace deteriorated late on and he was passed for sixth place by Giuliano Alesi.

The battle for reversed grid pole was decided on the penultimate lap. Juan Manuel Correa dived passed Simo Laaksonen at Turn 11 to seize eighth place and leaving the Campos driver to fend off Correa’s Jenzer Motorsport team-mate Tatiana Calderon on the final lap.

Ryan Tveter had run as high as seventh early on but lost significant pace during the mid-way point of the race. He slipped to 11th.

Arden’s Joey Mawson made a promising start from 20th on the grid but was eliminated from contention in the early stages after damaging his front wing on the Turn 20 sausage kerb. He pitted and finished last.