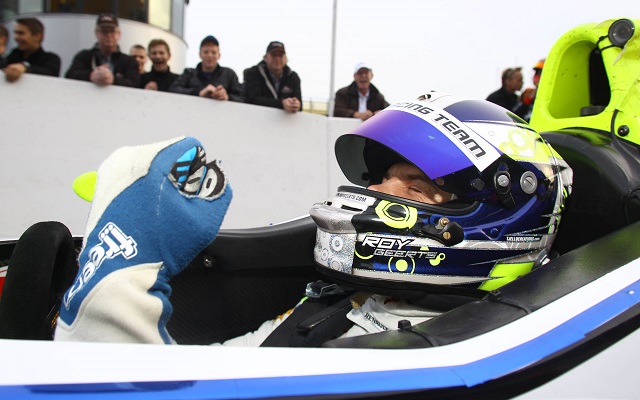 The first Formula Renault NEC 1.6 season saw a dramatic finale at Assen, as the two title contenders, Roy Geerts and Martin Rump, ended up being separated by one single point.

Pontus Fredricsson started the race on pole, just as he did in the previous race, but the Swede got it all wrong once again and found himself having to serve a drive through due to jumping the start. Rump and Geerts had the third and seventh places on the grid.

Fredricsson’s mistake allowed Tommy van Erp to take the lead in front of Paul Blomqvist, Larry ten Voorde and Geerts, who was already ahead of a struggling Rump.

As the race went on, Ten Voorde and Geerts both managed to overtake van Erp. Meanwhile, Rump continued to lose positions due to car issues, first dropping behind Janneau Esmeijer and then having to defend position from Patricio O’Ward.

Coming into the final lap of the race, Rump, who by that point fell behind O’Ward, was still leading the provisional standings. However, ten Voorde, who was leading ahead of Geerts and happened to be his teammate, gave up first in order to help his countryman take the title. The position change saw Geerts gained another six points and, despite Rump retaking sixth from O’Ward on the same lap, the Estonian came up one point short at the line.

After his victory earlier today, Blomqvist picked up another podium after passing van Erp in the closing stages of the race. Esmeijer secured third in the standings with fifth, with Rump coming in sixth place. Mexican O’Ward had to settle with seventh, closely followed by Paul Sieljes. Swede duo Oliver Soderstrom and pole-sitter Fredricsson rounded out the top ten.