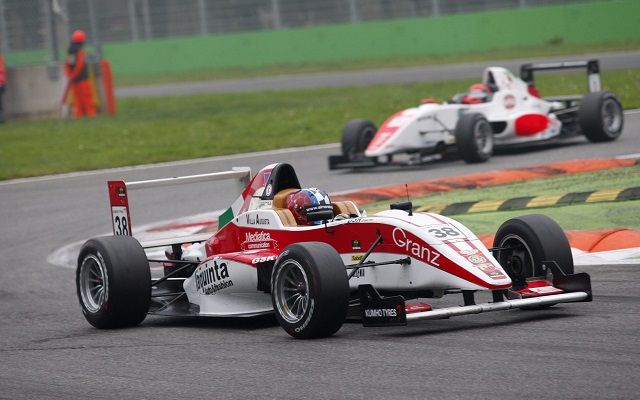 Simone Iaquinta took a dominant 20-second victory in the second race of the Formula Abarth finale at Monza despite starting on the back row of the grid.

Alessandro Perullo was the reverse-grid poleman for the race and managed to get off to a good start, keeping the lead into turn one. However, he came under pressure from Michele Beretta and Lukas Moraes right away, and, in the ensuing fight for the lead, it was outside contender Iaquinta who prospered, overtaking car after car to take the lead on lap two.

Perullo would be out of the race on the next lap, after contact with Moraes left his car beached in the gravel. Series champion Alessio Rovera was forced to call it a day on the very same lap, losing the car into Ascari.

At the front, Iaquinta and Beretta settled into first and second respectively, with the duo starting to pull away from the rest of the field. However, Beretta would end up dropping to fourth on lap six when he spun at Lesmo.

As such, Iaquinta was free to cruise to the end of the race, which was exactly what the GSK driver ended up doing. Dario Orsini had a calm race, finishing in second, while Vitaly Larionov topped the National class and rounded out the overall podium.

Beretta settled for P4, ahead of Sergey Trofimov and Denis Nagulin, who was given a drive through early in the race due to a time infringement on the grid. Moraes took seventh, himself having to serve a penalty after the Perullo incident.