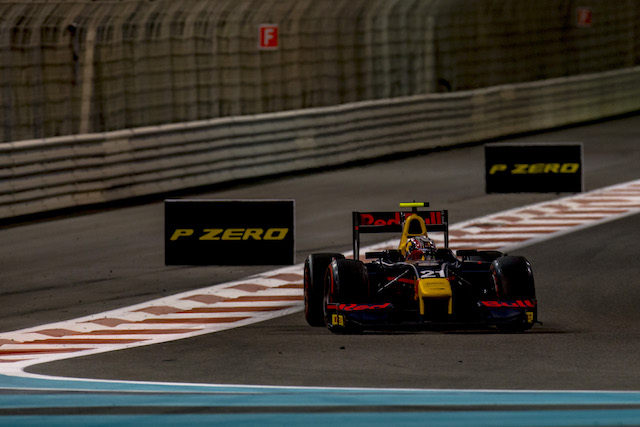 Pierre Gasly will take a 12-point lead into the final race of the GP2 season after a dominant feature race win in Abu Dhabi.

Starting from pole position, with a three-point deficit to rookie Prema team-mate?Antonio Giovinazzi, Gasly pulled open a big lead over?Sergey Sirotkin in the early stages on the fragile supersoft tyres.

The Frenchman’s only scare came when he was held in his pit box to wait for passing traffic, but he managed the race thereafter to finish 6.7 seconds clear of the rest.

Already starting down in sixth, Giovinazzi went backwards towards the end of the first stint, but staged a decent recovery to salvage fifth.

Gasly however will go into Sunday’s?sprint race needing to score just five points to wrap up the title.

Nobuharu Matsushita?and?Artem Markelov both returned to the podium for the first time since their Monaco victories in May after strong races.

Matsushita began on the medium tyres and passed?ART team-mate Sirotkin on track before leading much of the race.

After his late pitstop for supersofts he rejoined behind Markelov – who slipped from third to fifth at the start – but quickly got ahead of the Russian and posted the fastest lap of the race.

After extreme tyre wear on the supersofts at the start, Sirotkin finished fourth.

He was followed across the line by?Norman Nato, but the Frenchman took a five-second penalty for speeding in the pitlane, which relegated him behind Giovinazzi.

Johnny Cecotto took seventh with a strong run in his third race back in the category with Rapax, getting ahead of?Alex Lynn when the DAMS driver?suffered a slow stop late on having sat second to Matsushita for most of the distance.

Lynn is set to?start on reverse-grid pole for Sunday’s sprint race, and will hope there is no repeat of last year when the corresponding race was cancelled while he was in the same position.

Nicholas Latifi scored his first points since Spielberg in ninth ahead of Raffaele Marciello, who audibly appeared to have an exhaust issue and was slowed in his late stop by an errant wheel from?Luca Ghiotto in his path as he emerged.

Oliver Rowland sat fourth early on between Matsushita and Markelov but retired with a flat tyre soon after his pitstop.