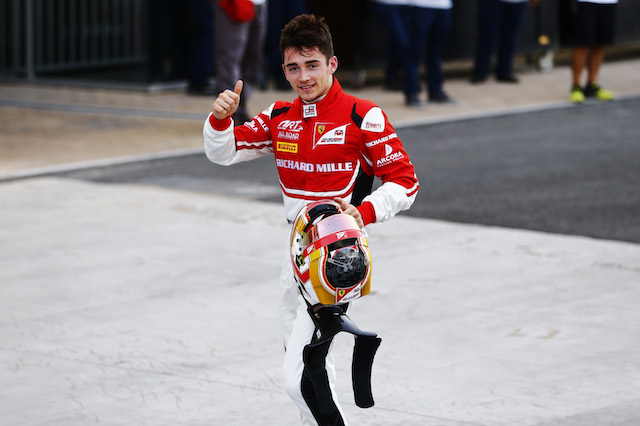 Charles Leclerc has wrapped up the GP3 title with a race to spare after rival?Alex Albon crashed out of race one in Abu Dhabi while fighting for the win, which went to?Nyck de Vries.

Leclerc would also crash out in a separate incident soon afterwards, but his fate was already sealed by Albon’s failure to score.

Polesitter Albon kept the lead at the start but came under pressure from a fast-starting?Jack Aitken following a lap-eight safety car.

Arden driver Aitken got past into Turn 11 on the restart, but did so having run off track on the exit of?Turn 9.

Stewards chose?to investigate the Renault Sport Academy driver, who then slowed to let Albon back into the lead.

Aitken got a run on Albon into Turn 11 again later that lap, got alongside through the corner but was then hit by Albon when the Anglo-Thai driver launched himself over the inside kerb at Turn 12.

The incident forced Albon into retirement with broken suspension, confirming Leclerc as champion.

Having qualified fifth, the Monegasque racer lost a further place on the first lap to?Santino Ferrucci, and would have had his lead over Albon reduced from 25 points to eight had his rival won.

In the closing stages Leclerc tried to re-pass Ferrucci into Turn 11, but was forced up onto the outside kerb and then made contact with the American when he tried to drop back off the kerb.

This caused damage to Leclerc’s right-left corner which sent?him straight on and out of the race.

De Vries scored his second win of the season after holding?Jake Dennis at bay, the Briton having initially slipped from second to fifth in a slow start before repassing Leclerc on the exit of Turn 1.

Aitken fell to fifth after the coming together with Albon but finished up on the podium, passing Ferrucci at Turn 11.

Having run deep, the DAMS driver cut the corner to keep the place but gave it up a few corners later.

He was later handed a 10-second penalty for forcing another driver off track which dropped him to ninth.

Jake Hughes had a charging drive to seventh from a pit-lane start, after DAMS mechanics left a cooling blower attached to his car in qualifying. He will join?Konstantin Tereshchenko on the front row of the final race.