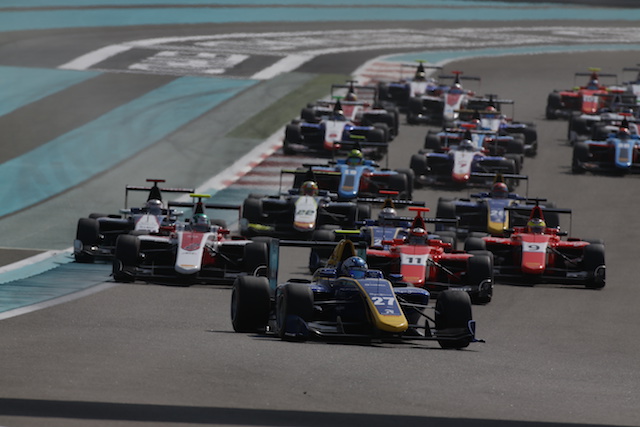 Jake Hughes took his second GP3 win in the final race of the season in Abu Dhabi, completing a perfect comeback from a pitlane start in the opening race.

Starting second on the reverse grid after his charge to seventh on Saturday, Hughes got a good getaway but was covered off by polesitter Konstantin Tereshchenko.

This opened the door for a fast-starting Nirei Fukuzumi down the inside of Turn 1, but he ran deep, forcing the Campos cars of Tereshchenko and Steijn Schothorst off track and enabling Hughes to sweep into the lead on the inside.

The safety car was soon deployed after defeated title contender Alex Albon spun into the barriers on the back straight after tangling with Tatiana Calderon.

After the restart, Hughes had to soak up pressure from his ex-Formula Renault rival Jack Aitken, but was able to pull away in the closing stages to win by 2.8 seconds.

Aitken had Fukuzumi and Arden team-mate Jake Dennis close behind for most of the race, but Fukuzumi had to defend hard from Dennis on the final lap to keep hold of a podium place.

The three Campos cars fought over fifth, with Alex Palou beating Tereshchenko by hundredths of a second with Schothorst close behind.

Champion Charles Leclerc produced a fine drive from the back of the grid and briefly held the final points position into Turn 11, but ran deep and lost out in an entertaining scrap with Kevin Jorg.

Race one winner Nyck de Vries had an intense fight with Antonio Fuoco over 11th, involving contact at Turn 18 for which the Italian took a five-second penalty, dropping him to 17th.