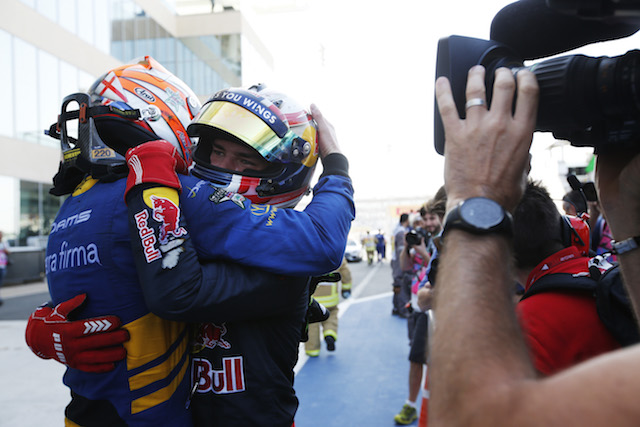 Pierre Gasly has secured the GP2 title despite failing to score in the final race of the season in Abu Dhabi, in which his former team-mate?Alex Lynn?took his third win of the year.

Gasly had taken a 12-point margin over?Antonio Giovinazzi into the decider after his feature race victory, but his Italian rival was starting fourth on the reverse grid with Gasly only eighth.

A top-three finish could have been enough for?Giovinazzi to win the title, but he fell to sixth through?the opening corners.

He was passed by a fast-starting Sergey Sirotkin off the line, and then as he challenged?Johnny Cecotto into Turn 2, he was squeezed to the inside and Nobuharu Matsushita got by around the outside.

From there, Giovinazzi was unable to make any progress,?meaning that being passed for ninth on the final lap was no problem for Gasly.

Lynn led from reverse grid pole?to?chequered flag for his fifth career GP2 win in his final race for?DAMS, finishing 4.9 seconds ahead of?Johnny Cecotto, who was in his second outing with Rapax and was able to repass Sirotkin on the final lap.

Matsushita followed up his second place in the feature race with fourth in the sprint after a pass on?Norman Nato, who kept Giovinazzi at bay for fifth.

Artem Markelov attacked Giovinazzi late on and the pair banged wheels?at Turn 12 with the Italian determined to stay ahead.

Mitch Evans got ahead of Gasly on the DRS down the back straight, although Gasly tried to fight back on the brakes and forced the Kiwi off track in avoidance.

Evans would hand the place back, but quickly got back past Gasly at Turn 19 for the final time to rob him of the final point.