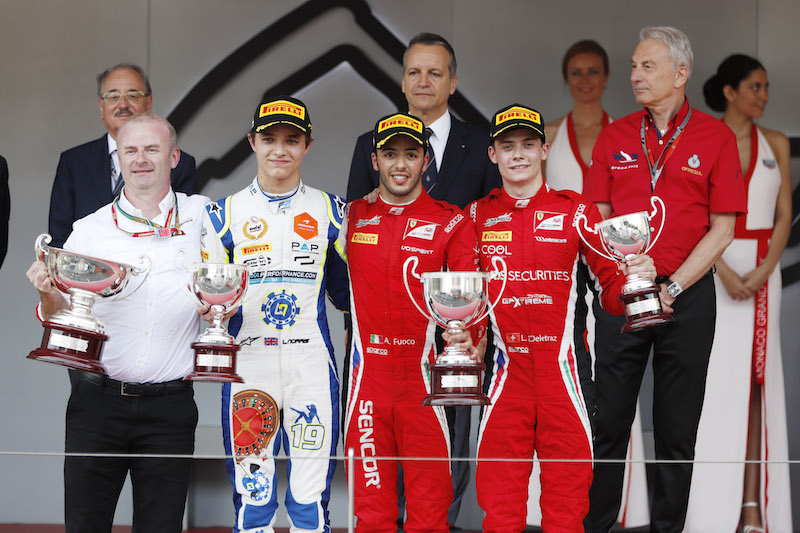 Ferrari junior Fuoco led from reversed-grid pole position, having finished the feature race in eighth place despite a drive-through penalty for putting Luca Ghiotto in the barrier at the start.

Norris, who also picked up a penalty in the feature race for contact, started third on the grid and took a place at the start from a slower-starting Jack Aitken, who then lacked power up the hill and had to retire with a technical issue.

An early virtual safety car to clear cars stranded on the grid was followed by a full safety car when Sean Gelael crashed heavily at the Swimming Pool on lap four of 30.

After initially building a one-second lead at the restart, Fuoco’s advantage was cut by Norris to just 0.3 seconds at one stage, before a particularly slow lap from the McLaren junior increased the gap to 1.7s.

Following a brief VSC when George Russell crashed on lap 20, Fuoco’s lead went above three seconds, where it remained until the safety car returned on lap 27 when Alex Albon and Roy Nissany collided exiting the tunnel.

With little warning, the race was restarted with two laps to go with Norris right up behind Fuoco, but the Italian enjoyed a good gap once he put his foot down out of the Swimming Pool section.

The race was immediately neutralised once again when both Nirei Fukuzumi and Santino Ferrucci skated deep into La Rascasse on the restart – with Ferrucci suspecting there was fluid on track.

That secured Fuoco victory, while Norris’ second place increases his championship lead to 29 points after both Albon and Russell failed to score once again.

Louis Deletraz made it a double podium for Charouz after holding off feature race winner Artem Markelov in an intense battle, with the Swiss driver describing it as the hardest race of his life.

Having gained two places off the line with a strong start, Markelov put a superb move on Arjun Maini inside at La Rascasse on lap 17 to take fourth.

He instantly closed the gap to Deletraz, who later revealed he was struggling to change gear with a dashboard issue.

After one attempt to go around the outside at Sainte Devote, Markelov later ran alongside Deletraz all the way up the hill to Massenet, but could not get ahead.

With five laps to go, they made contact at Anthony Nogues when Markelov tried an optimistic move, but Deletraz managed to stay out of the barriers and held the position until the end.

Markelov moves up to second in the championship, level with Albon.

Roberto Merhi took fifth late on from Maini, with Maini protesting that he was passed under safety car conditions.

Maximilian Gunther was seventh while Nicholas Latifi took the final point despite pitting twice. Nyck de Vries and Luca Ghiotto were the final finishers in ninth and 10th, one lap down after being left on the grid at the start – the latter after hitting the stalled car of Tadasuke Makino.