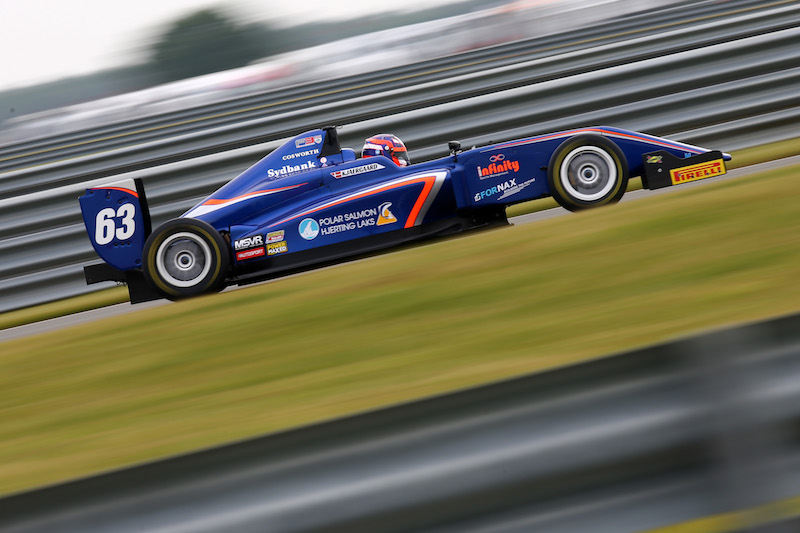 Carlin’s Nicolai Kjaergaard was victorious in the BRDC British Formula 3 opener at Snetterton after starting the race from pole position.

After the first lap, Kjaergaard had pulled out a one second lead over championship rival Linus Lundqvist.

Kjaergaard, who has won once and finished second in three races before this weekend, then proceeded to control the race until the chequered flag.

Double R Racing’s Lundqvist put some pressure on him during the race through fast laps, but on the penultimate lap dropped down to third behind Lanan Racing’s Kush Maini.

Maini finished 4.684 seconds behind Kajaergaard, with Lundqvist completing the podium in third.

Further back there was a late battle for fourth between Jordan Cane (Douglas Motorsport) and belated series debutant Harry Webb (Chris Dittmann Racing), with the two crossing the line fourth and fifth with 0.347s in between them.

Fortec’s Tristan Charpentier made it six different teams in the top six at the chequered flag, although he was being hunted down during the second half of the race by Billy Monger in seventh.

Monger himself was under threat from Charpentier’s team-mate Tom Gamble, with 0.391s separating the two drivers at the end of the race.

Sun Yue Yang finished the race in ninth to ensure all three Carlin drivers were in the top 10.

Double R Racing’s Krishnaraaj Mahadik rounded out the top 10 with the Hillspeed pair of Sasakorn Chaimongkol and Jusuf Owega not far behind him.

Jamie Chadwick (Douglas Motorsport) and Pavan Ravishankar (Double R Racing) were the only two other competitors to finish the race on the lead lap.

Manuel Maldonado started his race in 11th and was passed by Chaimongkol on lap 5, but dropped down to last on the penultimate lap, and will start race two on reversed-grid pole as a result.