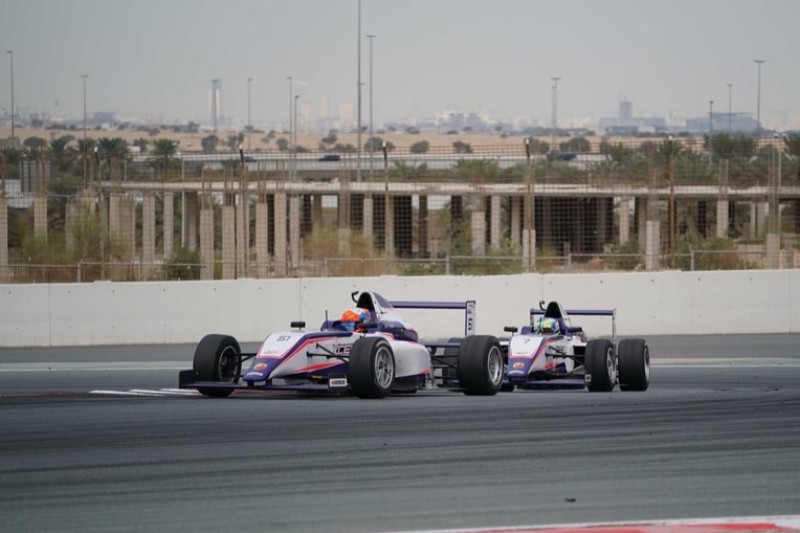 Francesco Pizzi stormed to a hat-trick of wins on his single-seater debut in the Formula 4 UAE season opener at Dubai Autodrome.

Heavy rain meant the fourth race of the weekend was cancelled, and Pizzi’s three wins leave him with a 23-point lead over Xcel Motorsport team-mate Nicola Marinangeli.

Abu Dhabi Racing’s Hamda Al Qubaisi beat Pizzi to pole for race one, but the young Italian shot into the lead at the start.

Pizzi pulled away until his team-mate Lorenzo Fluxa managed to pass Al Qubaisi and close in on the leader. Pizzi held on to win by 0.201 seconds, while struggles with tyre wear dropped Al Qubaisi to sixth.

Al Qubaisi was on pole again for race two, but a poor start led to Gohler taking the lead. There were several other slow starters, and a few jumped starts too which led to penalties.

Fluxa passed Al Qubaisi for second and battled with the penalised Gohler for the lead, until contact between the pair resulted in Gohler spinning and Flux dropping down the order. Pizzi inherited the lead, and victory, as a result.

Patterson claimed fourth after Fluxa was penalised for his clash with Gohler, and Xcel’s Zdenek Chovanec claimed sixth despite a penalty for his own jumped start.

Race three took place on a drying track, with Al Qubaisi again on pole. This time she kept the lead at the start, but then span on the opening lap. This caused chaos further down the field, with Chovanec coming to a halt while trying to avoid her and resulting in a safety car intervention.

Pizzi was the new leader, and made a strong restart. He was unchallenged thereon, as Fluxa, Gohler and Marinangeli battled for second.