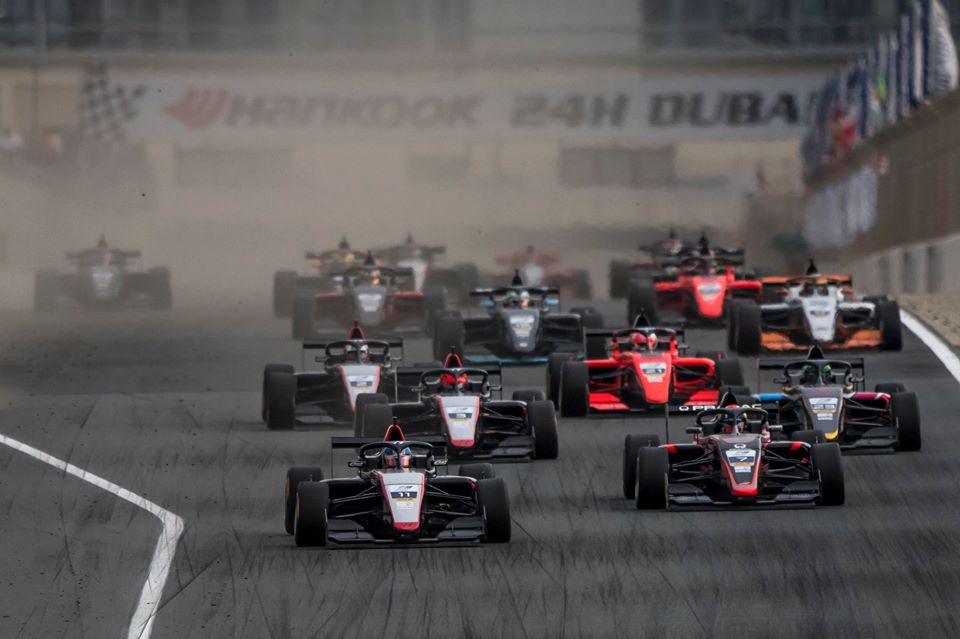 Jack Doohan, Joey Alders, and Yu Kanamaru each took a win in a chaotic Asian Formula 3 weekend at Dubai Autodrome.

It wasn?t until the final lap that the Pinnacle Motorsport driver challenged, and the pair ran side-by-side until the final sector, where Doohan clattered over a kerb and they collided.

Doohan continued to the chequered flag with a large gap to BlackArts Racing’s Alders in second, enough to negate the penalty. Sasahara’s car was too damaged and he retired.

Sebastian Fernandez marked his debut appearance with Pinnacle by finishing third, having battled down the order early on with Absolute Racing’s Jamie Chadwick.

Devlin DeFrancesco (Absolute) spent the second half of the race battling to stay ahead of Jake Hughes (Hitech), Chadwick and Pietro Fittipaldi (Pinnacle).

Alders snatched the lead after Hughes ran wide on lap one, and from there had a comfortable margin over Fernandez, who stormed into third on lap one and passed Hughes for second in the race’s second half.

Hughes slipped backwards late on, falling behind Mazepin and Doohan. Mazepin put up a good fight, but Doohan managed to squeeze past three corners before the finish to claim third.

The only crash came when Fittipaldi clipped the back of Sasahara’s car, knocking off his own front wing.

Lead pair Hughes and Doohan collided in race three, with Doohan spinning out and Hughes dropping behind Mazepin.

BlackArts’ Kanamaru, who started ninth, had climbed his way up through the order and soon passed the struggling Hughes.

He closed in on and passed Mazepin too, then stretched out an astonishing 23.598s lead in short time for his first single-seater win since Euroformula Open in 2015.

Mazepin then battled with Sasahara, and while he finished ahead he was penalised and demoted to sixth.

Sasahara – ineligible for points – therefore claimed second ahead of Alders, now with a 37-points lead, and Fernandez.