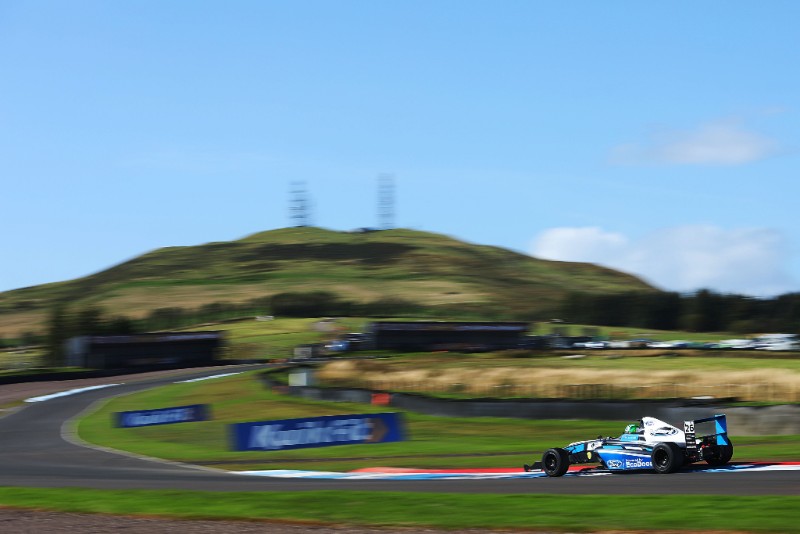 Maloney had qualified on pole, but was unable to make it to his grid box and was pushed up from the final hairpin to pitlane. Carlin rapidly changed the left-rear drive shaft, allowing Maloney to return to the track eight laps behind the rest of the field.

The mechanical problem put Double R Racing’s Foster on net pole and he stormed away from team-mate Sebastian Alvarez off the line.

Foster had built a gap of almost a second when the safety car was brought out at the end of lap one, after Fortec Motorsports’ Roberto Faria parked his car in the gravel.

On the restart, Foster couldn?t shake Alvarez and JHR Developments? Josh Skelton, but slowly began to build a gap when the pair began to battle for second. Foster was unchallenged for the remainder of the race and finished 0.978s ahead of Alvarez.

Second place allowed Alvarez to close the gap to Maloney in the standings to 15 points, with third placed Skelton a further 45.5 points behind.

Skelton’s team-mate Carter Williams was running fourth after the early safety car, but soon came under pressure from Luke Browning.

Williams managed to maintain the position for a number of laps before a small mistake sent him through the gravel and allowed Richardson Racing driver Browning through.

Arden duo Alex Connor and Tommy Foster got alongside Williams as he rejoined the track, but he was able to stay ahead while the two team-mates squabbled. Foster ended up winning the duel.