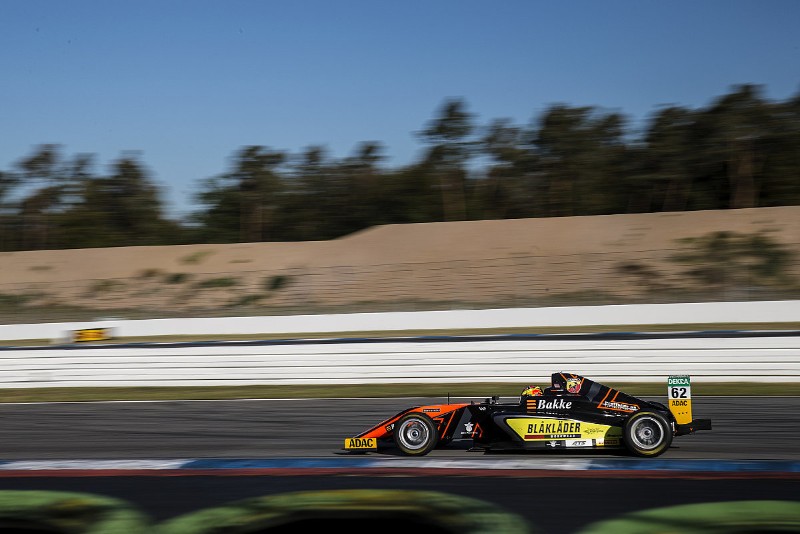 The Van Amersfoort Racing driver rose from eighth to fourth on the opening lap of the reversed grid encounter, and from thereon used the circuit’s hairpin to clinically overtake those ahead.

He made it into the lead shortly before Prema’s Oliver Rasmussen crashed into the gravel at Sachs Kurve and caused a safety car period. Rasmussen had started the race from pole, and his crash resulted in a VAR 1-2-3.

The podium lockout was broken at the restart as Sebastian Estner was passed for third by Sauber junior Roman Stanek, who after being rebuffed by Ido Cohen at the hairpin then put in a skilled move around the outside of the Mercedes corner for second place.

While he couldn’t catch the dominant Hauger, Stanek escaped the chaotic scenes behind him.

On the opening lap, Prema team-mates Gianluca Petecof and Paul Aron has pinced R-ace GP’s Lazslo Toth, while points leader Theo Pourchaire span at Turn 1. Aron retired on the spot, but the other cars charged their way back into contention.

Pourchaire had against the odds made it up to seventh, and an Estner mistake resulted in Mikhael Belov, Joshua Duerksen and Pourchaire all attempting to trade position.

Belov damaged his front wing but passed Estner, and then tracked down third-placed Cohen.

Estner meanwhile went on to make side-on contact with Pourchaire. Duerksen, not for the first time, went wide and gave Pourchaire a reprieve by letting him through.

Crossing the line for the penultimate time Duerksen then went wide again, and fell out of the points behind Pourchaire, Lucas Alecco Roy, Petecof and Alessandro Ghiretti.

Pourchaire now has a one point lead over Hauger heading to the season finale, with the gap between the pair having been 68 points coming into the weekend.

Also racing near the front at various points were Arthur Leclerc and Nico Gohler, but both retired on mechanical grounds, while Kosovan debutant Kristian Thaqi ended his day with 12th place.