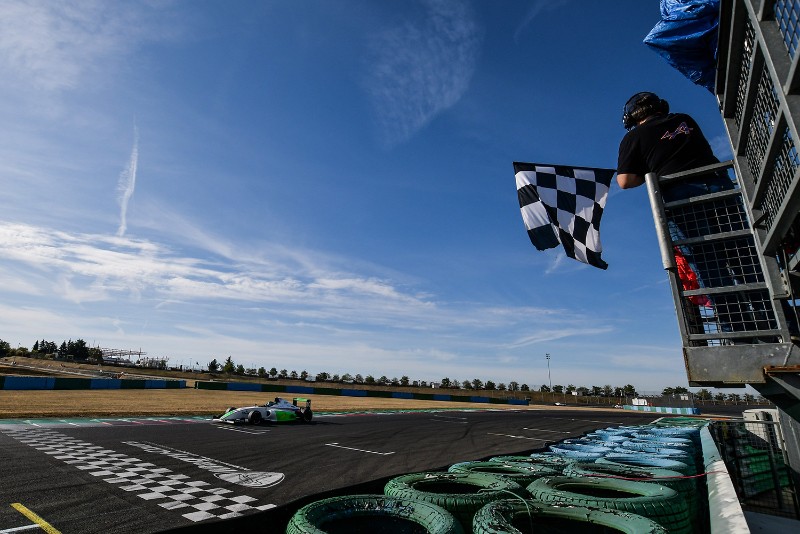 After putting his car on pole, de Gerus thought he would have his hands full of title rival Hadrien David in race one, but he was proven wrong and swept to an easy third win of the season.

David had been passed at the start by Jules Mettetal, who couldn’t keep his more illustrious rival at bay for the whole duration but did cross the line in third.

What would have been his first podium was taken away though by a penalty, and American Nicky Hays ended up in third.

Evan Spenle finished 10th, putting him on pole for race two. He converted it into a maiden win over Ohta by 3.270 seconds, despite Ohta being faster on one-lap pace.

Hugo Valente did hold third place behind them at first, but there was an impatient queue of cars wanting to get past him. Gillian Henrion and Isack Hadjar challenged at first, until a failed move by de Gerus lost Henrion places and span Hadjar out of the race.

Bernier, David and Hays were far more successful in their attempts to get past Valente, and it was David who finished third after a late pass on Bernier.

De Gerus was back on pole for the final race, and never looked troubled. After pulling away from David at the start, a safety car restart brought them back together but de Gerus was having none of it and pulled away once again on the restart.

Applying pressure on David were the improving Van der Henst and Hays in third and fourth, while Hadjar took the Junior win in fifth place.