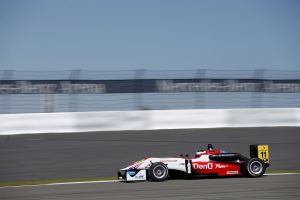 Successful Formula 3 squad Fortec Motorsports, which ran in the European championship between 2013 and ’15, is looking to return to the series this season despite missing out on one driver to a rival team.

Fortec switched to Euroformula Open for 2016 after failing to find drivers with sufficient budget for European F3, and is intending run drivers in both series for 2018.

The team were close to signing two drivers for the upcoming European F3 season, before one decided to sign to a rival.

“We were very close with two drivers, but because Carlin were told they’d be allowed to run six cars this year then one of them went there,” Fortec boss Richard Dutton told Autosport.com

“We’re still looking at it, and we have one driver we’re very keen to do something with, but we’d want to do it with more than one car – if we can put two together, then we’ll do it.”

Fortec has also recently announced its arrival in Formula 2, after the demise of World Series Formula V8 3.5, and will continue to race in Eurocup Formula Renault and Britain’s F3 and Formula 4 championships.

The return to European F3 in 2018 is to act as precursor to its planned involvement in the all-new FIA International F3, which is set to replace the current European championship and GP3 in 2019.

The EF Open team will then act as a feeder to its International F3 operation.

“We?re looking in fact to re-enter into the new FIA F3 championship. So we would retain EF Open as a feeder for that,” Mick Kouros, Fortec’s EF Open team manager, told Formula Scout late last season.

“That?s how we see EF Open. To be honest with you, that?s how it is. It isn?t a match for FIA F3, it is a preparation level for FIA F3.

“So drivers that do EF Open, really are trying to learn the European circuits, gain some experience in a similar car not quite the same. In view of trying to then step up to FIA F3/GP3, which will be amalgamated in 2019”.