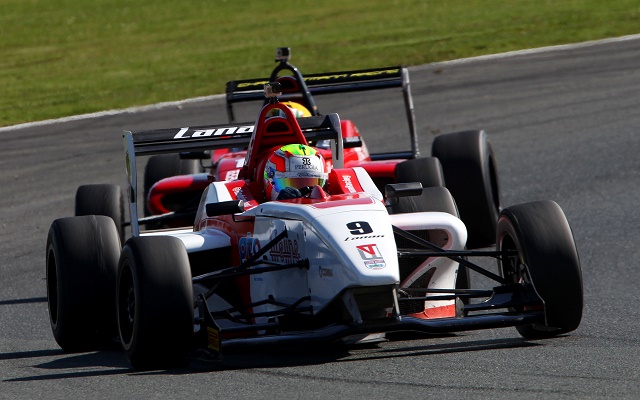 A lap-one pileup triggered by leaders Will Palmer and Jordan Albert has allowed Lanan Racing’s Rodrigo Fonseca to secure his first win in the BRDC F4 regular season.

Fonseca, who won in BRDC F4’s Winter Series but was yet to claim a main championship win, qualified in fifth. But he gained one spot even before the start when poleman Harri Newey‘s car expired.

Palmer led Albert into turn one as the green flag waved, but the pair collided into turn two, also catching out third-placed Jack Bartholomew and a number of other cars.

As such, Fonseca was through into the lead, with Jack Lang moving up to second from 12th on the grid and Akhil Rabinda taking third place.

The race restarted aftre three laps under safety car and, as Lang started holding up the drivers behind him, Fonseca was free to break away.

The Mexican did just that and at no point further on looked like he could lose the race.

Rookie Lang did a great job keeping Rabindra at bay, which allowed the latter’s compatriot Ameya Vaidyanathan to steal third on lap eight.

Vaidyanathan, whose Oulton Park debut yielded a best finish of 12th, then worked his way around Lang to claim second.

Lang took third, holding off Rabindra, who spun out trying to snatch the last podium spot in the final corner. Behind them, Sebastian Lanzetti tried to pass Ciaran Haggerty and ended up hitting the Scotsman and earning a 60-second penalty.

As such, fourth went to Lanan’s Chris Mealin, who had passed several cars after falling out of the top ten on the lead lap.

Albert recovered to fifth, with Bartholomew making in three Lanan cars in the top six.