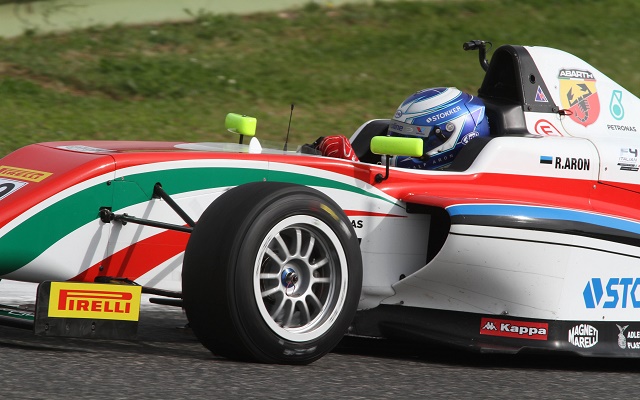 Estonian racer Ralf Aron delivered a win for reigning champions Prema in the first Italian F4 race of 2015 at Vallelunga.

Aron led the field off the line and had little trouble controlling the race over the distance.

The Estonian managed a decent getaway off the line, but had to fend off teammate Guanyu Zhou into turn one.

However, that’d be about as close as anyone got to troubling Aron, with the rest of the action going on further down the pack.

Promising Venezuelan Mauricio Baiz was in the barriers on lap one, marking the beginning of the chaos in what ended up being a very hectic race.

Marcos Siebert was up to fourth behind Joao Vieira at the start, but soon came under huge pressure from battling Mucke teammates Robert Shwartzman and David Beckmann.

Shwartzman did get through, but Siebert was very aggressive in defending from Beckmann, the duo nearly coming together on several occasions and falling into the clutches of Giuliano Raucci and Matteo Desideri.

Inevitably, Siebert and Beckmann clashed after moving towards each other on a straight. Beckmann went around but escaped relatively unscathed, while Siebert was off with a broken suspension. Both Raucci and Desideri also picked up damage.

The crash allowed Yan Leon Shlom into fifth, but he was soon passed by Jenzer’s Nico Rindlisbacher.

Out front with ten minutes to go, Vieira passed Zhou and settled for second, with Aron out of reach at five seconds ahead.

The Ferrari junior was then also passed by Shwartzman, who was very quick in the last stages of the race and almost cleared Vieira as well.

Behind the leading four, Rindlisbacher recorded his best finish in cars, while Kevin Kanayet, who started last, marked his debut with sixth, inheriting a spot after teammate Shlom spun under pressure.

Marino Sato was shuffled down early on but recovered to second, ahead of Lucas Mauron, Bar Baruch and Beckmann.

Mucke’s Thomas Preining was among the most notable performers of the race, charging through the field before having to pit to repair damage on the front wing.