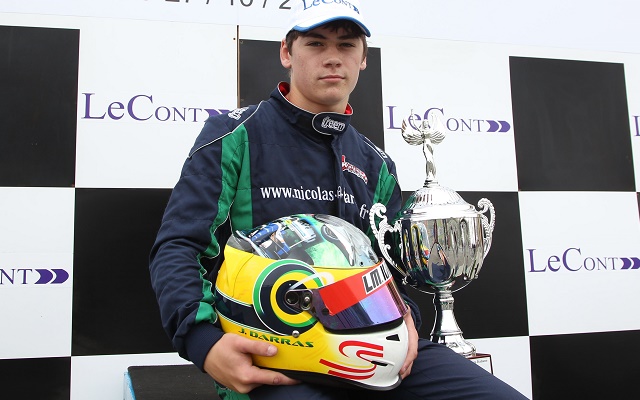 Prior to his French F4 switch, Darras was a top karter, winning the 2013 Italian KF2 series (Photo: ACI Sport)

Just as in the first race, the track was drenched in the afternoon, prompting a safety car start.

The starting order has been determined by reversing the top ten of race one. Darras initially held 11th, but was promoted when Nerses Isaakyan picked up an “unsporting behaviour” penalty. This allowed the Frenchman to start from pole ahead of Louis Gachot and Kami Laliberte.

After two laps of cruising, the race went green?and Darras had a good getaway, going on to build a lead of three seconds.

Gachot and Laliberte were running second and third at the early stage of the race but eventually both of them lost their respective positions after being involved in two separate incidents.

As a result, Nikita Troitskiy inherited second and started to close the gap on Darras. However, his efforts were not enough and the Frenchman escaped to claim his first win in cars.

Troitskiy had to do with second while top sophomore driver Simo Laaksonen broke through to third ahead of the charging Sacha Fenestraz.

Laliberte?settled for eighth, while the top ten was completed by Axel Matus and Ye Yifei.

Tsuboi gets one over on Makino at Fuji