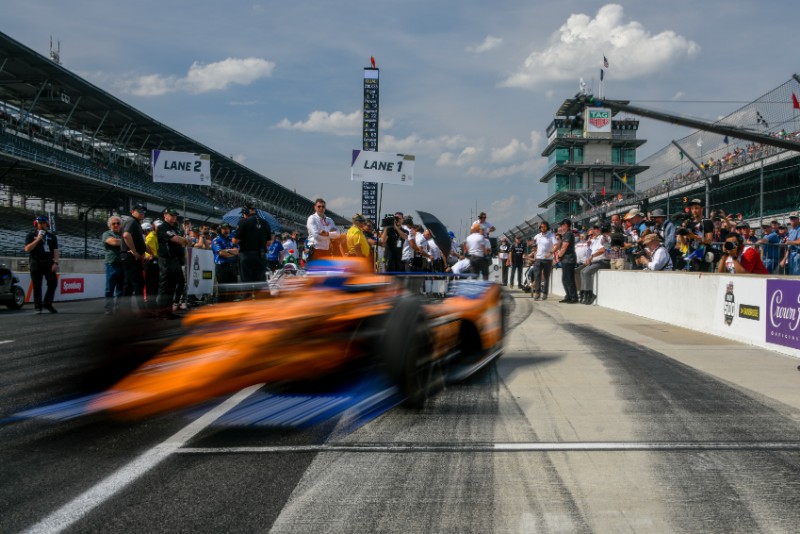 Following McLaren’s announcement that it will field two cars in partnership with Schmidt Peterson Motorsports in IndyCar next season, it was only natural to assume Fernando Alonso was its main target.

The Spaniard has been part of each of McLaren’s last two efforts on the Indianapolis 500, assisted by junior single-seater teams Andretti Autosport and Carlin on each occasion, but has indicated he does not want to commit to a full season of racing in America.

This leaves one of the seats, or possibly two should the Chevrolet-powered team lose Honda-sponsored James Hinchcliffe, free for a new driver to represent the McLaren brand in the championship.

Formula Scout presents five young drivers, and a older McLaren-associated star, who should be in consideration for a 2020 seat…

Indy Lights points leader Oliver Askew is more than likely to be racing in IndyCar in some capacity next year, and although he currently races for Andretti Autosport, it’s fellow IndyCar powerhouse Chip Ganassi Racing that has signed up the Floridian for testing duties.

This is testament to the quality of his 2019 season so far, with six wins and six poles from 13 races, and he is on course to succeed Patricio O’Ward as Lights champion. O’Ward’s career has taken off since his title-win, being signed by the Red Bull Junior Team and parachuted into contention for a F1 future.

A similar long-term worldwide investment in Askew, who made his car racing debut in Formula Masters China following a successful karting career, would make a lot of sense for McLaren.

The young American, who finished runner up in the 2016 Walter Hayes Trophy, has been making waves since winning the inaugural Mazda Road to Indy Shootout in 2016 and rapidly progressing up the Road to Indy ladder together with long-term rival Rinus Veekay.

Askew beat Veekay to the 2017 USF2000 title but lost out to the Dutchman in Indy Pro 2000 last year, finishing third overall. If VeeKay is able to overturn Askew’s points advantage in the remaining Lights races, then he too should be under consideration.

A full time IndyCar programme would be the next logical step for Askew, who impressed Chip Ganassi during his first laps in its Dallara, usually driven by five-time champion Scott Dixon, at Portland International Raceway earlier this week.

Sergio Sette Camara is third in the standings in his third season of Formula 2, and sixth of racing, and is improving every year.

After finishing sixth with Carlin last season, as team-mate to Lando Norris, McLaren signed him as test and development driver for 2019.

The 21-year-old Brazilian is currently in F2 title contention, albeit a distance behind former McLaren junior Nyck de Vries and Nicholas Latifi. DAMS team-mate Latifi has also been linked to a McLaren IndyCar seat, with his father a significant backer of the team, but the Canadian’s performances look set to earn him a Williams Formula 1 drive next year, an opening he is unlikely to turn down.

There are no other foreseeable F1 slots to accommodate Sette Camara, and that is if he’s deemed deserving of a seat, and it would do him no harm if he continued his racing career Stateside while continuing his McLaren F1 commitments.

Over the years Brazil has had a strong presence in IndyCar, and he would certainly be welcomed. Since 2017 three-time Indy 500 winner Helio Castroneves has scaled back his appearances, and 2004 champion Tony Kanaan is also reaching the end of his career. With Sette Camara still only 21, he could ensure his nation continues to have a long-term presence in the series.

A move to IndyCar would allow Sette Camara to continue his ongoing development with McLaren, where he can receive guidance from compatriot and sporting director Gil de Ferran – the 2000 & ’01 CART champion – and SPM owner Sam Schmidt – winner of the ‘IndyCar World Championships’ race at Las Vegas in 1999.

More drivers are joining IndyCar without Road to Indy experience, meaning Sette Camara wouldn’t be alone in being new to circuits as he joins his former Macau Grand Prix rival Felix Rosenqvist in professional racing.

McLaren was founded by a New Zealander, so it’s only natural that a Kiwi should be under consideration for its IndyCar return.

Nick Cassidy has already carved out a career as a professional single-seater driver, joining Super Formula with Kondo Racing in 2017. Over two seasons he turned around the fortunes of the team, and has quickly adapted to the championship’s new car this year with TOM’S.

Unlike title rival Naoki Yamamoto, who has also shown interest in IndyCar, he is not bound to Honda and therefore free to drive a Chevrolet-powered Indycar.

Although Cassidy ended up playing second fiddle to Lance Stroll in European Formula 3, he proved his title-winning credentials in Japan and his native Toyota Racing Series, as well as demonstrating his street circuit ability at Macau. Had he scored six more points over the last two years he would also be a two-time Super GT and one-time Super Formula champion.

His TRS experience will probably be of the most use, with the unique challenge posed by New Zealand’s circuits being the most comparable to America’s narrow and bumpy road courses.

The most exciting prospect of course is seeing Cassidy prove once again what F1 teams missed out on when he was an underfunded teenager.

McLaren knows de Vries extremely well, having signed him while he was a karting prodigy, with the two parties having only gone their separate ways recently.

Dr Vries struggled to live up to his potential during his time at Woking, and was victim to the frequent changes of management, gradually falling out of favour as each new boss came in.

He’s now getting the job done in F2, living up to expectations after replacing George Russell at ART Grand Prix. But even if he secures the title, it’s far from certain that he will get a chance in Formula 1. Without financial backing, it’s difficult to see a team wanting to take a chance on somebody they many perceive as a ‘reject’ from a rival outfit.

Other professional championships will therefore provide de Vries with his next step. He’s already got a World Endurance Championship drive with a Dutch LMP2 squad, and he’s got strong Formula E connections too. But IndyCar is also a logical move for somebody with such strong single-seater pedigree.

There might be too much previous between the two parties for it to be a realistic possibility, but a recall to McLaren for its IndyCar project, off the back of an F2 title, would be a perfect redemption for the Dutchman.

Pietro Fittipaldi may not have any current links with McLaren, but he would make a great candidate for its IndyCar line-up.

The 23-year-old also has some previous IndyCar experience, having competed in six races for Dale Coyne Racing in 2018, where he took a top 10 finish in only his fifth race. That came at the end of a disrupted season that began in Super Formula and was interrupted by a World Endurance Championship crash at Spa-Francorchamps’ Eau Rouge corner that broke both of his legs.

He recovered quick enough to take up the Haas F1 test driver role this year, as well as race for Keke Rosberg’s team in the DTM. While Paul di Resta and Pascal Wehrlein made racing under a roof work for their F1 ambitions, Fittipaldi’s results so far do not look strong enough to challenge Romain Grosjean for the second Haas seat in 2020.

The young Brazilian also does not have the required FIA superlicence points (unless he took an unlikely DTM title win), so returning to IndyCar could be a great stepping stone towards F1.

Haas currently has larger worries than letting Fittipaldi join a rival, and having his name in a McLaren IndyCar would be an exciting prospect for both parties.

And one that missed the boat…

Oliver Turvey won the McLaren Autosport BRDC Award in 2006, earning himself a F1 test, and has been one of the team’s test drivers since 2012, just over a year after his junior single-seater career ended.

Said career showed a lot of promise, all under the support of the Racing Steps Foundation, but one win in Formula Renault 3.5 and another in GP2 Asia was all Turvey had to show for it after Jaime Alguersuari beat him to the 2008 British Formula 3 title.

A race-winning European Le Mans Series campaign in 2013 led to three appearances at the Le Mans 24 Hours, including victory in the LMP2 class in 2014, before single-seaters came beckoning once again in the form of a Formula E cameo.

He filled the second Team China Racing seat for the 2014-15 season finale at Battersea Park, where team-mate Nelson Piquet Jr won the inaugural title, and he has remained with the rebranded NIO team ever since.

After that first season success, there has only been one pole and one podium, and last season was the team’s worst to date. Turvey scored all of the team’s 2018-19 points, a measly seven, and ended up 20th in the standings.

After a generally poor time in FE, despite immense respect from within the paddock, now is probably the best time for a fresh start.

Although he doesn’t have age on his side, at 32, Turvey has the experience of a number of single-seater categories. And having worked with McLaren for so many years, particularly in its simulator, it clearly values his knowledge. He’s mechanically minded and helped McLaren with some of its trickier F1 cars, so he should smoothen its transition to IndyCar.