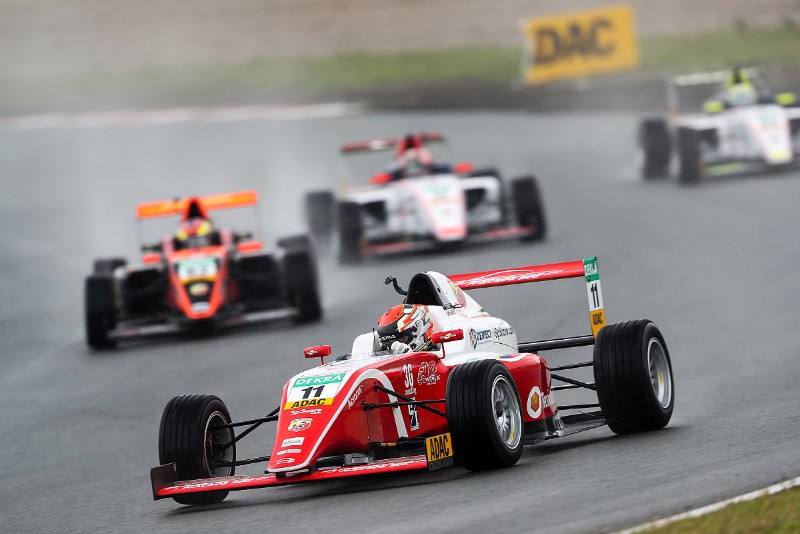 A decision to start a wet race on slick tyres propelled Alessandro Famularo to a first ADAC Formula 4 victory at Zandvoort.

In addition to continuous strong crosswinds, a pre-race rain shower meant most drivers switched to wet tyres on the grid.

After the safety car led the field around for the first lap, most drivers swapped their tyres for slicks, and once the pit-stop cycle was complete in green flag running, Famularo was in the lead.

Seventh-placed starter Arthur Leclerc had timed his stop best, and on his fresher tyres closed down the half-minute gap Famularo had been gifted by his strategic masterclass.

That gap was wiped out when Lucas Alleco Roy rearended his Van Amersfoort Racing team-mate Sebastian Estner into Turn 1 and the safety car was brought out, but Famularo hugged the inside line on the restart and ensured he remained ahead.

Leclerc continued to challenge for the lead, including a second safety car restart after R-ace GP’s championship debutant Hadrien David crashed hard, but there was still enough damp areas of the track to make overtaking too difficult.

The top four finished the race separated by just over half-a-second, with Prema’s Famularo leading Sauber juniors Leclerc, Theo Pourchaire and Roman Stanek. Famularo then came under investigation for his driving during one of the safety car periods, but was ultimately cleared.

Alessandro Ghiretti, in the fourth US Racing-ran Sauber Junior Team car, and Mercedes junior Paul Aron were involved in that battle until Aron was spun around at Turn 1 shortly after the first mid-race safety car.

The battle for the final two points came down to VAR’s Niklas Krutten and Dennis Hauger, with the latter only just missing out despite being a lap down at the beginning of the race.