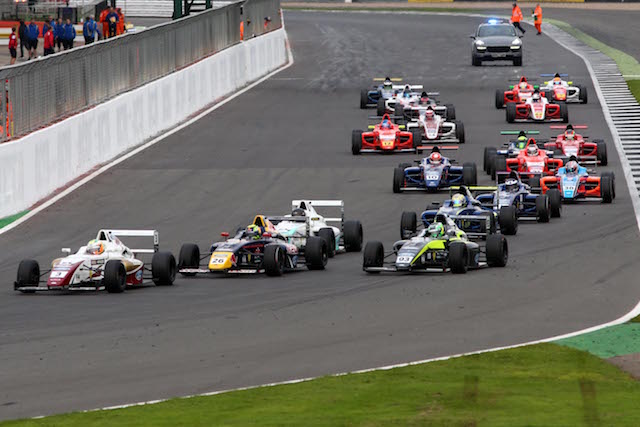 Sennan Fielding claimed the British F4 lead away from Max Fewtrell at the penultimate round of the season at Silverstone, where Zane Goddard won twice.

Australian Goddard grabbed the lead of race one with a flying start from fourth on the grid around the outside of Copse as polesitter Fielding battled?Luis Leeds on the inside.

He opened up a lead of more than four seconds, and that became more than seven seconds after a penultimate-lap clash between Fielding and Leeds that left the Red Bull Junior’s car with a puncture.

Fielding surivived?to take a crucial second, cutting his pre-event deficit to Fewtrell of 24 to just six after a first-lap clash with?Billy Monger left Fewtrell to fight back from last to 11th, just shy of the?points.

Jamie Caroline was first in line to pass Leeds on the last lap for the final podium place, but a bid around the outside led to him being hit by the understeering Australian, enabling?Devlin DeFrancesco to grab the place in front of Carlin team-mates?James Pull?and?Petru Florescu?and the?Arden trio of?Rafa Martins,?Ayrton Simmons and Leeds.

Alex Quinn?wrapped up the rookie crown in race one by coming from 19th and last on the grid to finish ninth ahead of team-mate and rival?Nicolai Kjaergaard, and the Racing Steps Foundation-backed driver made the most of reverse-grid pole for race two by taking his third outright win of the year.

Martins passed team-mates Simmons and Leeds in consecutive laps at the start to get second, with Leeds completing the podium.

Fielding raced well from eighth to fourth, enough to tie for the points lead with Fewtrell, who finished seventh (behind DeFrancesco and Goddard) from 16th on the grid after a penalty.

Goddard had to work for the race three win, holding third early on as Leeds led Fielding, but worked his way into the lead past Leeds at Brooklands on lap seven and opened up a 2.6-second lead.

Third for Fielding gives him a five-point advantage over Fewtrell, who finished fifth.

Fewtrell was alongside the eventual winner Goddard out of the first corner but was soon passed by Monger and DeFrancesco.

He rallied, posting fasting laps as he re-passed Monger and caught back up to DeFrancesco, but couldn’t find a way past.

As well as Fielding and Fewtrell, Leeds, DeFrancesco, Pull and Quinn remain in mathematical contention going to Brands Hatch, but Florescu is out of it after a difficult Sunday.