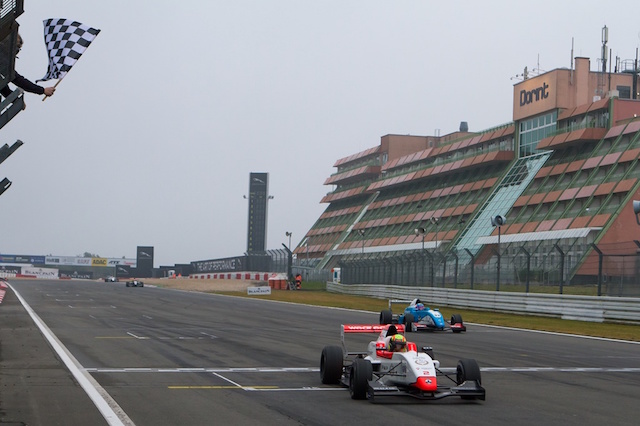 Lando Norris moved a step closer to the Formula Renault NEC title with victory in the second race of the weekend at a foggy Nurburgring.

Max Defourny finished a close second and becomes the closest rival to Norris?after Dorian Boccolacci crashed out, while Marcus Armstrong came close to a podium on his European single-seater debut.

Norris had missed out on race one victory after a slower start than team-mate?Robert Shwartzman, but the tables were turned at the start of race two, which was significantly delayed by a typically foggy Sunday morning in the Eifel Mountains (a race was cancelled at the same event in 2014).

While Norris moved into a clear lead from pole, Defourny came from fourth on the grid to take second, surviving a sizeable clash of wheels with Jehan Daruvala as he went around the outside of the Indian at Turn 1.

Third-place starter Shwartzman meanwhile was slow away, and found himself on the outside of a four-way fight for fourth as Armstrong dived down the middle?of Tech 1 drivers Hugo de Sadeleer and?Sacha Fenestraz?under braking.

At the restart, Daruvala and de Sadeleer forced each other deep at Turn 1, enabling Armstrong to get alongside the Indian and challenge for third.

Daruvala just held on at the inside of Turn 2, while Armstrong?was swamped either side by de Sadeleer and Boccolacci into Turn 3, but he managed to emerge ahead of them in fourth.

Boccolacci – who had a formation-lap spin prior to?the first of two attempts to start the race but was handed a reprieve by the poor visibility – then tried to go around the outside of team-mate de Sadeleer at Turn 4 but ran wide, lost control and speared into?Ferdinand Habsburg, losing his nose cone and sending the Austrian into the barriers and out of the race.

Another safety car period followed, and Defourny was close to Norris at the restart, as he had been the first time.

He remained locked on to the Briton over what remained of the race but ultimately had to settle for second.

The Belgian?climbs to second in the standings past Boccolacci, 48 points behind Norris with 90 up for grabs across?three races at Hockenheim in two weeks’ time.