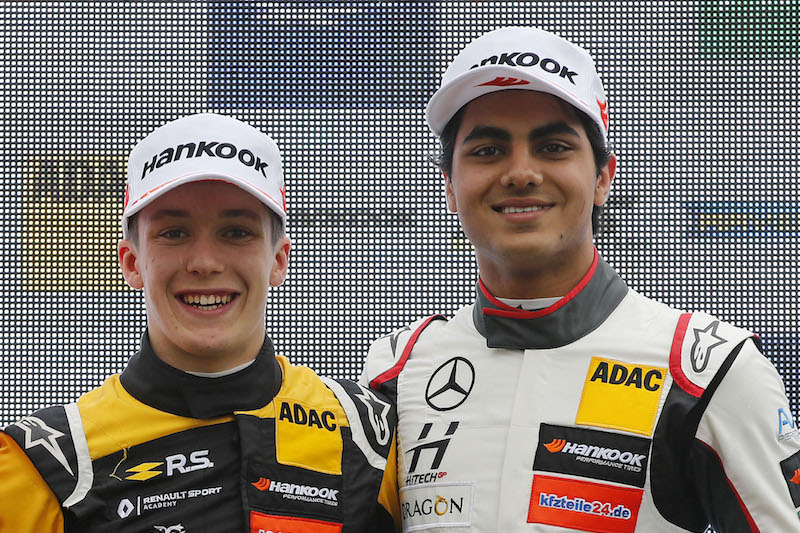 Renault junior Fenestraz brings a strong reputation for both wet-weather and street circuit driving into F3 from the lower categories, but he was languishing down in sixth place when the chequered flag came out in the first of the two qualifying groups – which had been reset according to the race one results.

He then leapt to the top of the times with his final effort, a 1m23.620s, to edge out the consistently-quick Ahmed by just three thousandths of a second.

With times rapidly improving through the first group as conditions improved, it seemed highly unlikely that Fenestraz would hold on to pole through the second group, but the small gap in-between sessions was enough for the rain to start falling again.

As a result, the quickest time in the second group, set by Alex Palou, was a second-and-a-half off Fenestraz’s effort.

Ahmed, who unlike fellow F3 rookie Fenestraz is driving in Pau for the first time this weekend, had set four consecutive fastest laps near the end of the session, and his reward for that was top spot on second-fastest times, which set the grid for the third and final race, the Grand Prix itself.

It was a superb session for Ahmed’s Hitech GP team, which had struggled?in the dry running earlier in the weekend to quite live up to its pre-season pace.

Palou was dominant in the second group. He sat the best part of a second clear for some time until qualifying one pace-setter Dan Ticktum pulled out a lap that was 0.01 seconds quicker with less than three minutes remaining.

The response of Palou – another Pau first-timer – was to go 0.7 seconds quicker, just before Ticktum ran straight on at the first braking point at Gare.

It took around a minute for Ticktum to complete the first sector, and he couldn’t get around the lap in time to start another attempt before the chequered flag. By the finish he had been relegated to fifth, equalling 10th on the grid for race one.

Palou’s fastest lap was 0.488s quicker than that of closest rival Fabio Scherer, and his second-best 0.507s faster, giving him a pair of front-row starts for Sunday, while Motopark rookie Scherer will start fourth both times.

In the third Hitech car, Welshman Ben Hingeley perhaps felt at home in the conditions and joined Ahmed among the leaders in the first group.

He finished up third to take fifth on the grid for race two, though he’ll slip to 14th for the Grand Prix.

Jehan Daruvala sat on top of the first group when the chequered flag came out but ended up fourth after not improving on his final lap. It was a similar tale for Jonathan Aberdein in fifth.

Having come second in race one, Ralf Aron was only sixth quickest in the first group, putting him 11th on the grid for race two, but he was second on second-fastest times – albeit 0.247 seconds adrift of Ahmed – to secure third for the Grand Prix.

Marcus Armstrong took third in group two to get sixth on the grid for race two in front of Julian Hanses, who was impressive in the sole ma-con entry to take fourth in the group on his final lap, demoting Ticktum despite clobbering the Pont Oscar barrier late on.

For the Grand Prix, Daruvala moves up to fifth on the grid with Ticktum alongside, with Fenestraz and Armstrong to share row four.

Three of Armstrong’s Prema team-mates will start both races outside of the top 10, with Robert Shwartzman 13th and 11th, Mick Schumacher 18th and 12th and race one winner Guan Yu Zhou a lowly 16th and 18th.

Juri Vips will be at the back after crashing at Pont Oscar in the first group, bringing out the only red flag.