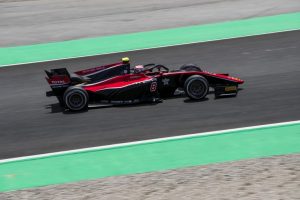 Russell, who started the race in fourth, managed to pass both Luca Ghiotto and polesitter Alexander Albon at the start. He then used DRS to pass race leader de Vries on lap six of 36.

The front two made their mandatory pitstops on the same lap, with Russell’s remaining ahead.

With four laps remaining, de Vries dived to the inside at the hairpin Turn 5. Russell cut back on the exit of the corner to retain the lead.

Extending his advantage to beyond a second in the final few laps, Russell claimed his second consecutive F2 win. He is, however, facing a post-race investigation for throwing his drinks bottle out of the car in the opening stages.

Mclaren F1 junior de Vries settled for second. He did briefly slip to third in the opening stint of the race, as he was passed by a recovering Albon. The DAMS driver had fallen to fourth on the opening lap, before passing Ghiotto and then de Vries to reach second. These positions were reversed late in the stint, as Albon’s tyres hit the cliff.

Ghiotto and Albon eventually finished fourth and fifth. Denying Ghiotto a podium was McLaren reserve driver Lando Norris. The championship leader started the race eighth but used the softer tyre in the opening stint. This meant that he pitted earlier than those ahead and jumped both Ghiotto and Albon when they pitted.

Norris challenged de Vries for second place on the final lap but was unable to craft a true overtaking opportunity.

The use of the same strategy as Norris assisted Jack Aitken in finishing sixth, with the pair battling each other during the pitstop phase.

Sergio Sette Camara recovered from 14th on the grid following his qualifying throttle issues to finish seventh. He was another driver to utilise the softer tyre at the start of the race.

The Russian Time pairing battled for eighth place and the crucial reverse grid pole. Artem Markelov, who started the race in 19th, emerged from his pitstop with just five laps remaining in ninth place. He closed in and passed team-mate Tadasuke Makino on the penultimate lap.

Antonio Fuoco finished 10th for Charouz Racing System. His team-mate Louis Deletraz was one of five retirements. Deletraz bumped wheels with Sean Gelael heading into the braking zone at Turn 1, causing race-ending damage to both cars.

Earlier in the race, the MP Motorsport duo of Ralph Boschung and Roberto Merhi suffered a similar incident, with Boschung retiring as a result. Maximilian Gunther spun into the gravel at Turn 2 on the opening lap and Arjun Maini crashed at Turn 5 later on. The incidents meant that the virtual safety car was called upon on four occasions during the race.