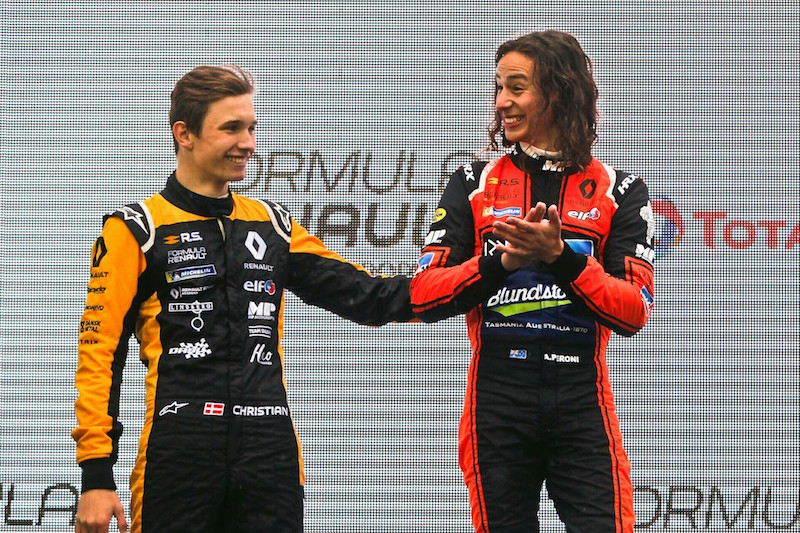 Alex Peroni repeated his Pau victory from one year ago after a penultimate-lap mistake from team-mate Christian Lundgaard?in a wet opening race of the Formula Renault Northern European Cup season.

Eurocup points leader Lundgaard looked set for victory after leading from pole position, but he came under pressure late on from Peroni, who had reduced the lead gap from 1.2 seconds to 0.7s with two minutes left on the clock.

One lap later, Lundgaard failed to get his car slowed down for the first major braking point at Gare, running wide and opening the door for Peroni to slip through.

There were 3.5 seconds separating the MP Motorsport pair at the finish.

Lundgaard’s former Formula 4 rival Alexander Smolyar also let a strong result slip at the end of the race, losing third place when he hit the barriers at Gare heading onto the final tour, and stopping further around the lap because of the damage to the front of his car.

That promoted Logan Sargeant to the podium, with the American remaining ahead of his French team-mates Charles Milesi and Victor Martins.

Neil Verhagen was sixth in front of Thomas Neubauer and Arthur Rougier, while Doureid Ghattas headed the full-time NEC entries in ninth, four seconds in front of Gabriel Gandulia.