written by Rachel Harris-Gardiner 12 May 2018 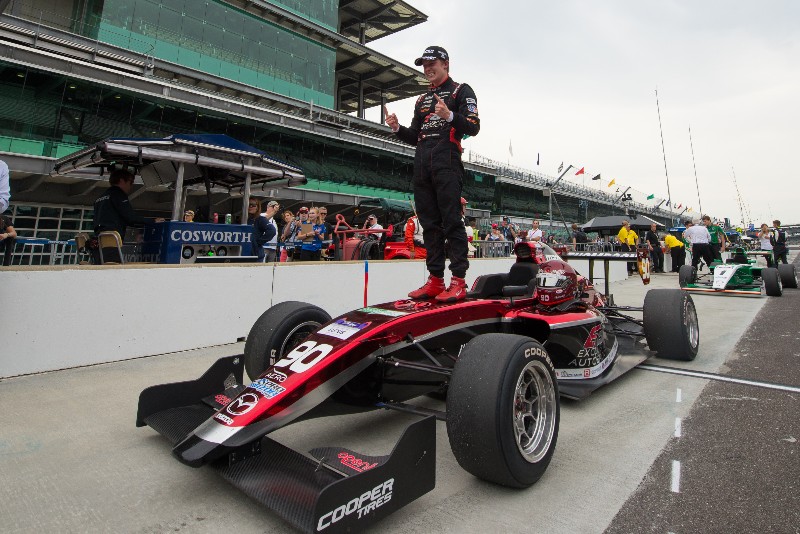 Parker Thompson overcame the loss of an engine at Indianapolis to take his second win of the season and extend his Pro Mazda championship lead.

The failure of a “25 cent” part led to Thompson losing an engine, and the quick repair work by his Exclusive Autosport team he was able to qualify, albeit in 11th and 6th for the two races.

Cape Motorsports’ Oliver Askew took pole for both races, but didn’t have the same luck in the races.

The reigning USF2000 champion locked up at Turn 1 at the start of the first race, dropping to sixth and handing old rival Rinus VeeKay the lead.

VeeKay’s Juncos Racing team-mate Carlos Cunha moved into second, and went for the lead at the restart after a short caution period. He repeated Askew’s error, and David Malukas moved into second. He overtook VeeKay further round the lap, but received a drive-through penalty as his move had been completed with all four wheels outside of the track limits.

Harrison Scott was the next to challenge VeeKay, and overtook the Dutchman legally. Another caution period allowed Askew to reclaim second, and he hounded Scott to the flag. VeeKay finished third, ahead of Cunha, Thompson and Nikita Lastochkin.

The start of the seocond race was chaotic, with Robert Megennis moving over on Malukas and VeeKay, sending VeeKay off the track and into the pits. It took three laps to clear the track before a single-file restart.

Polesitter Askew initially held on to his lead but was soon caught by Cunha. Askew was then jumped by Thompson whilst battling for position with Scott. His race got even worse when he was was handed a drive-through penalty for avoidable contact, which dropped him down the order.

Mechanical issues for Scott gave the front two a big gap, but that was eradicated when Scott’s RP Motorsport team-mate Lodovico Laurini dropped fluid on the track and caused a caution period.

The restart allowed Thompson to gain on Cunha, although it did take him several laps to overhaul the leader, who got cautioned by stewards for blocking Thompson.

Team Pelfrey pair Sting Ray Robb and Andres Gutierrez benefited from the chaos to occupy third and fourth for much of the race, but a resurgent Askew meant the team-mates were split come the end of the race.

Gutierrez and Robb battled against each other as much as their other rivals; Gutierrez was even warned at one point for blocking Robb. The situation was confused slightly by Megennis, who was a lap down but still posting fastest laps and getting involved in the Pelfrey battle.

They were challenged by Malukas and Kris Wright at times, but neither stayed on-track long enough to make it stick. Wright rejoined and finished sixth, but Malukas retired on lap 16.