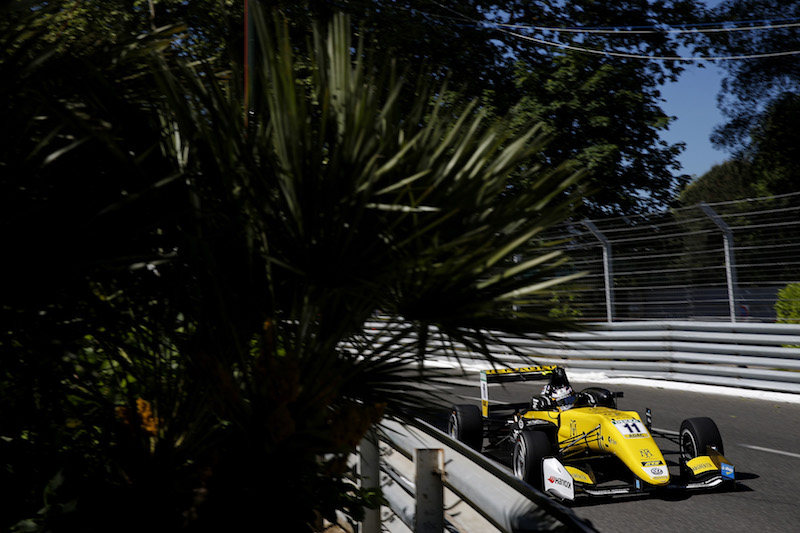 Sacha Fenestraz won the second race of the Formula 3 European Championship season opener on the streets of Pau after resisting the surprise challenge of Fabio Scherer, who eventually crashed out.

Having qualified on pole position, Fenestraz seemed to have a scare on the formation lap when he was slow exiting La Gare, but he was able to regain his position at the head of the field.

The Franco-Argentine then kept the lead at the start while Scherer shot from fourth to second with a brilliant launch.

Motopark driver Scherer was right on Carlin man Fenestraz’s tail at the end of the first lap, and remained close when the safety car came out five laps in after Devlin DeFrancesco and Artem Petrov’s eventful Pau debuts continued when they collided at Pont Oscar.

At the restart two laps later, Scherer was again right with Fenestraz, and attempted a pass around the outside of La Gare but ran too wide.

Fenestraz was briefly able to build a small cushion, but mid-way through he suddenly had to defend again from Scherer into the Lycee hairpin, as light rain began to make the track slippery.

Alex Palou had recovered from a poor start to run right with the front two, and a couple of laps later into Lycee he showed his nose to the inside of Scherer into the braking zone at Lycee.

Scherer reacted by diving to the inside himself to defend, climbing over the inside kerb to avoid clattering into Fenestraz.

Despite there being small contact, the incident allowed Fenestraz to escape, with a fastest sector three later that lap giving him a 1.3-second margin.

A few laps later, Scherer crashed out spectacularly at the Foch chicane, sliding wide on the entry into the barrier on the left-hand-side, and rebounding into the tyre barrier on the other side of the track.

Fenestraz now had 2.5s in hand over Palou, and stretched that advantage to over three seconds across the remaining 10 minutes as he secured a popular victory on his ‘home’ circuit, where he previously won twice at in French Formula 4.

Palou was passed off the line not only by Scherer but also by Hitech team-mates Enaam Ahmed and Ben Hingeley, but the two Britons both ran wide at La Gare and made wheel-to-wheel contact.

They survived, but both Palou and Marcus Armstrong were able to slip through and finished second and third for podiums on their debut weekend in European F3.

Hingeley held off Ahmed – who will later start on pole for the Pau Grand Prix – by three tenths of a second for fourth.

Jehan Daruvala was also close behind in sixth, while ma-con entry Julian Hanses converted eighth on the grid into seventh at the finish.

The German managed to hold off the Prema trio of Ralf Aron, Robert Shwartzman and Mick Schumacher, who completed the top 10 having started outside of it.

Dan Ticktum was running 10th under the safety car when his headrest flew adrift heading down the pit straight, with Shwartzman having to swerve to avoid it. He was shown the black-and-orange flag and forced to pit and retire.