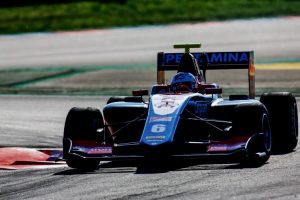 A wet track following overnight and morning rain made conditions treacherous and led to an incident-packed race.

Alesi vaulted from second on the grid to lead into Turn 1 after polesitter Juan Manuel Correa was slow away from the line.

ART Grand Prix’s Anthoine Hubert was the primary threat to Alesi’s lead, as he leapt from seventh on the grid to second by the end of lap 1.

Defending his lead successfully at the first two race restarts, Alesi had to complete a final safety car restart to enter the last lap of the race.

Again, he denied Hubert an opportunity to pass, setting the fastest lap of the race on the last tour, to claim his fourth GP3 reversed-grid win.

Hubert in second matched his result from Saturday’s race and now leads the championship after the opening weekend.

Like Hubert, team-mate Jake Hughes made significant progress at the start of the race. He climbed from 13th on the grid to fourth by the end of lap 1.

On lap 10 of the 17 lap race, he passed Correa at Turn 1 to earn a podium. Correa finished in fourth.

MP Motorsport’s Dorian Boccolacci and Niko Kari were drivers who made significant progress.

Boccolacci ended lap one in eighth but picked up a place on lap three when Pedro Piquet triggered the race’s first safety car intervention as he lost control on the exit of Turn 9, slamming into the inside wall. Boccolacci also passed the ART of Nikita Mazepin and later Callum Illot to finish an eventual fifth.

Kari started last and gradually progressed through the field. During the second safety car period, triggered when Gabriel Aubry was stranded in the Turn 8 gravel trap after being hit by team-mate Joey Mawson, Kari was in 10th place.

By the time the third safety car was deployed, he had reached seventh, and he passed Ilott on the final lap to snatch sixth.

Will Palmer was the only driver to start the race on slick tyres. He struggled throughout, heading through the gravel trap at Turn 8 at one point. He finished 13th.