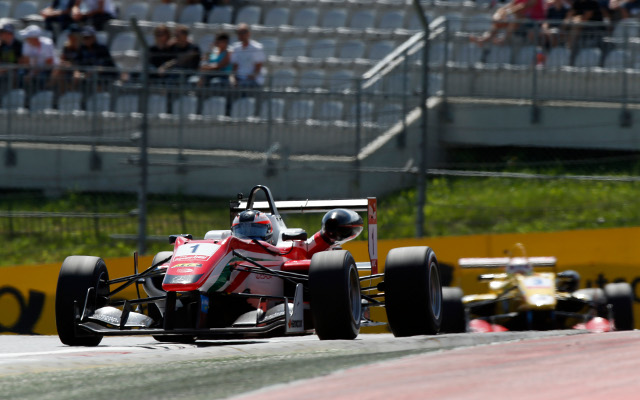 After retaining the lead from pole position, the F3 veteran was able to build a two-second advantage on the opening couple of laps as Antonio Giovianazzi and Lance Stroll fought over second.

Stroll had jumped Giovinazzi off the start, and although the Italian reclaimed the place at Turn 2, he had to continue defending on the following lap.

Once he had shaken Stroll off, Giovinazzi began to cut into Rosenqvist’s advantage, bringing the gap down to 0.8 seconds with a series of fastest laps.

The safety car was needed late on when Ryan Tveter spun into the gravel at Turn 4, with the race being restarted with three laps to go.

Rosenqvist did enough at the restart to avoid being challenged, winning by 1.3 seconds over Giovinazzi.

Stroll’s third place was his maiden podium finish in F3, having scored his fifth P4 finish of the season in race one earlier on.

Championship contender Charles Leclerc climbed from fourth in the early laps and spent the rest of the race chasing Stroll, but had to make do with fourth.

Fourth and fifth place starters Sergio Sette Camara and Markus Pommer both got into strife off the line – the German F3 champion making a second consecutive poor getaway while the Brazilian rookie was found to have jumped the start.

His penalty promoted Alex Albon into fifth, which he held until the chequered flag. Pommer had fallen to eighth at the start but after gaining a place from Sette Camara’s penalty, he passed George Russell after the restart and fell 0.039s short of beating Albon to the line.

Russell finished seventh ahead of a quiet race one winner Jake Dennis, with Mikkel Jensen ninth and Gustavo Menezes 10th after Callum Ilott fell back to 12th in the closing laps.