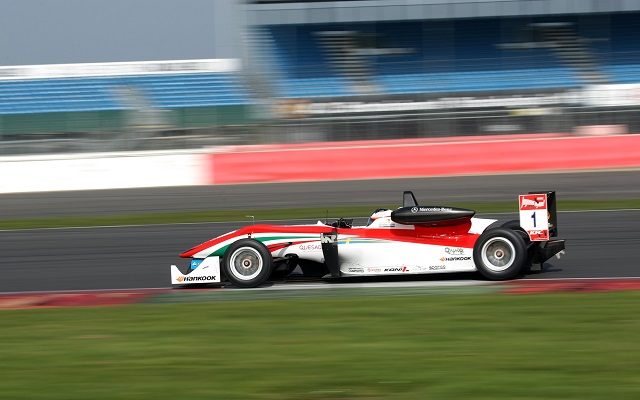 Felix Rosenqvist lived up to his status as the most experienced driver in the FIA F3 European Championship by claiming pole position for the first race of 2015 at Silverstone.

The Swede, who has joined Prema Powerteam for his fifth season in the series, claimed top spot by a quarter of a second ahead of his expected title rivals Antonio Giovinazzi and Jake Dennis.

The experienced trio went to the top of the timing screens with eight minutes remaining, and clearly caught the best of the track conditions as the entire field struggled to improve after that.

There had been much anticipation about what the star rookies could achieve in this session after impressing in pre-season testing and free practice but experience prevailed to restrict the best debutant George Russell to fourth.

Alex Albon kept up his strong form from practice for the returning Signature team to make it three British-born drivers inside the top seven.

Lance Stroll was the slowest of Prema’s quartet in eighth, following by lead Motopark runner Markus Pommer and another Briton Callum Ilott, who made the top ten for his first single-seater start outside of New Zealand and the Toyota Racing Series with an identical time to the German F3 champion.

Qualifying 2, to set the grids for races two and three, takes place later on Friday.