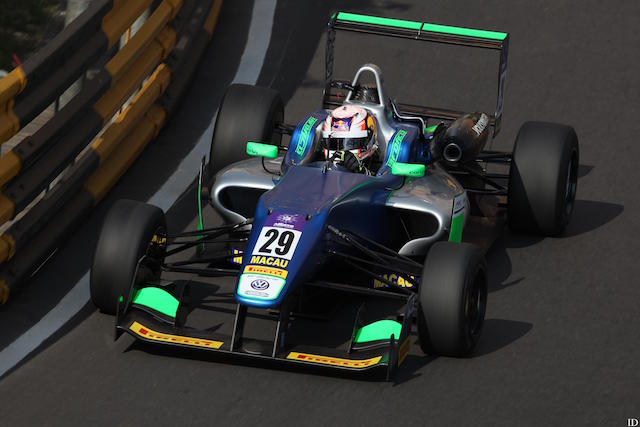 The 2012 winner hit the top of the times on three different occasions during the session.

Callum Ilott and?Felix Rosenqvist went ahead of them to second and third just as Norris slid into the barriers at San Francisco to trigger?what was already the third stoppage of the session.

The 17-year-old, in only his second event in an FIA F3 car, had been fifth in first practice and briefly quickest?in the first half of qualifying.

Juncadella later went off at Fisherman’s inside the final three minutes, bringing a premature end to proceedings.

The top three of Felix da Costa, Ilott and Rosenqvist remained in place, although Rosenqvist’s time was matched to the thousandth by Japanese champion?Kenta Yamashita, who has impressed for T-Sport and led the way into the final quarter of an hour.

Juncadella and Norris ended up fifth and seventh, separated by the lap record holder?Sergio Sette Camara.

Nick Cassidy ended a difficult day – where his car ground to a halt in the closing moments of first practice – with eighth place.

Jake Hughes?had joined fellow Carlin newcorner Norris in the top six in practice and hauled himself up to ninth in qualifying before the final stoppage, with?Sam MacLeod?10th.

At the same time as Norris crashed,?Joel Eriksson hit?the barriers hard at the Solitude Esses. The Swede ended up 20th, having so far struggled to shine in the way he has in Europe this season.

Fellow rookie?David Beckmann?was a fine ninth in practice and inside the top six at one point in qualifying, but ended up 22nd.

Sho Tsuboi was another to find the barriers in qualifying at Police and finished up 26th. Propping up the times were two that lost vital practice time to shunts:?Ferdinand Habsburg and highly-rated Honda protege?Tadasuke Makino.