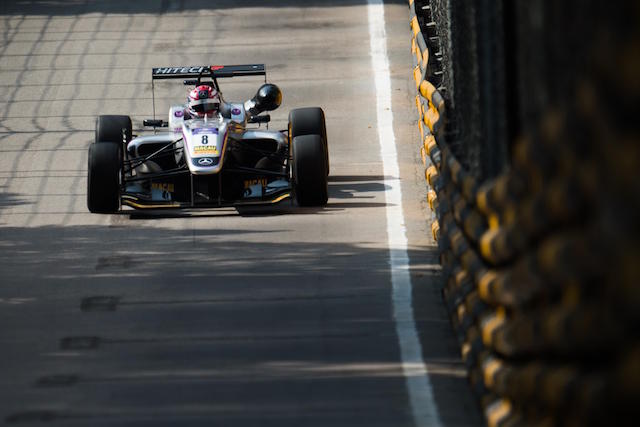 George Russell snatched a shock pole position at the Macau Grand Prix at the end of the second qualifying session.

The Briton was only 13th in Thursday’s first qualifying session, and in the same position in Friday morning practice, but became a frontrunner at the crucial moment.

Sitting sixth during a couple of late red flags, the Macau rookie took top spot away from compatriot Callum Ilott by 0.072 seconds with two minutes left on the clock, then went 0.37s clear on his subsequent?lap inside the final minute.

His pole was secured seconds later by a red flag after Arjun Maini?found the barriers at Lisboa.

“I went into this?weekend saying I would take?it easy, focus on Q2, but I was?much further down the order,” said Russell, driving for the Hitech Grand Prix team on its first Macau appearance.

“So?I was getting a little bit worried, but we made some changes to the car and I was?confident with what we did. I did a really good lap after the last red flag and I got pole, and just managed to?pull probably one of the best laps of my life out.

“I couldn?t have really ever imagined this after the sessions we had but what an awesome?result.”

Ilott had been the star of the day until its?final moments. He was fastest by half a second in practice, and hit the top in qualifying after 15 of the alloted 40 minutes.

He was still there come the first interruption with 10 minutes left on the clock as Japan’s?Daiki Sasiki crashed.

The restart didn’t last long, with?Maximilian Gunther hitting the barriers hard in the final corner as headed onto a flying lap.

After the final restart it was only Russell that really improved among the frontrunners as light rain began to fall, with Ilott retaining a place on the front row despite setting his time on old tyres.

“When I went out I did the lap on completely old tyres so I was pretty happy with that time, it was a really good lap,” said Ilott.

“Being at the rear of the pit lane it’s quite hard to get a lap, always trying to find space. I thought I?had two laps to come, but I only had one unfortunately.

“Honestly I was so disappointed. My radio wasn?t working, so the last I knew I was P1, and with the rain I thought no-one?would beat it. To see him on pole it was a bit of a disappointment but I’m happy for him as I know him quite well and he?s done a good job.”

Sergio Sette Camara was fourth in front of?Kenta Yamashita and?Jake Hughes, who was showing the speed to join his fellow Englishmen at the front with a session-best sector one when the session was ended prematurely.

Before his crash, Macau first-timer Gunther was showing?improved form and finished?up as the lead Prema driver seventh in front of struggling team-mate Felix Rosenqvist.

Lando Norris repeated his Thursday pace to top the times early on but was shuffled back to ninth, in front of the final Prema driver Cassidy.