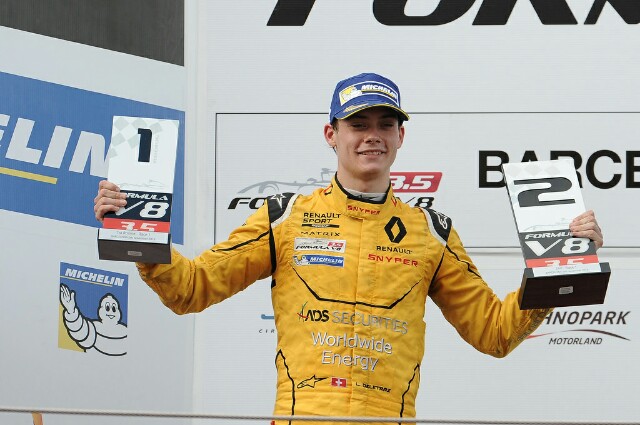 Formula V8 3.5 standout Louis Deletraz will make his GP2 debut in the final round in Abu Dhabi next weekend.

The 19-year-old Swiss racer will race for Carlin at Yas Marina, ahead of an anticipated full-time move to the series next season.

The German GP3 graduate finished second in the Monaco sprint race in May in only his second GP2 event, but has scored just three points since then.

Renault Sport Academy member Deletraz finished runner-up in his debut year in Formula V8 3.5, only losing the title to the experienced Tom Dillmann in the final race.

?GP2 is the championship that I want to race in next season so it?s great that I have the opportunity to contest the final race of the season with Carlin,” he said.

?It?s going to be a big challenge at Yas Marina because I have no previous GP2 experience. I?ll be learning a new car, a different kind of tyre, a new track and working with a new team. I?m definitely excited by the opportunity to make my GP2 debut and test myself in a new category. It will be interesting to see what the performance is like in Abu Dhabi.?

Team boss Trevor Carlin said: “We?ve watched Louis over the course of the season and he has impressed us with his ability to be challenging for the Formula V8 3.5 title in only his rookie season.

“Abu Dhabi will be a learning curve for him and no doubt he will take on a lot from the experience of racing in the GP2 car but we?re excited to have him in the cockpit and look forward to working with him in Abu Dhabi.?